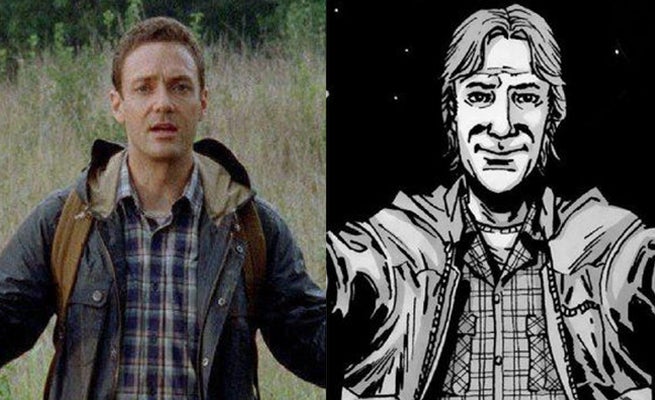 Just before this Sunday's episode of The Walking Dead came to an end, viewers were introduced to a brand new character. Warning: Spoilers follow if you have not watched this past Sunday's episode (season 5, episode 10 - "Them").

While Maggie and Sasha sat and watched the sun rise, a prominent character from the comic books made his first appearance on the television series. Aaron, portrayed by Ross Marquand, entered all of our living rooms throwing a bag of new questions at the audience.

For those who follow The Walking Dead's source material in the comic books, there is a big question as to how closely the character of Aaron will mirror his comic book counterpart. In an interview with Entertainment Weekly, Ross Marquand provided his view on the matter.

When asked if he educated himself on the comic series after being cast in the role, Marquand explained that while, "reading through Kirkman's comics was enormously helpful because you do get a really amazing sense of whom [Aaron] is," he didn't do that right off the bat. Instead, Marquand called showrunner Scott Gimple first for his take on whether or not to read the comic books. According to Marquand, Gimple told him, "I certainly wouldn't tell you to shy away from reading that because I think it will give you some great insights into whom he is, but ultimately I want you to make this character your own."

It seems apparent that the show as a whole will follow the foundations laid for these characters in the comic books, but also give the actors their own artistic freedoms and liberties.

What do you think, do you want The Walking Dead to be an exact adaptation of the comic book series or do you like that they mix a few things up and keep fans guessing?

The Walking Dead: Ross Marquand On If He Will Follow The Comics For Aaron