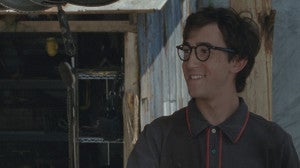 Warning: Spoilers ahead for the latest episode of AMC's The Walking Dead, titled "30 Days Without an Accident."

Sunday's season premiere of AMC's The Walking Dead aired to a record audience and put the show on pace to--again--be one of (if not the, as it was last year) the highest-rated shows on television. A key scene in the episode revolved around guest star Vincent Martella, who joined the series as a friend of Carl's who plays a kind of medium between the old-beyond-his-years son of series star Rick Grimes and the rest of the kids living at the prison, who seem to have retained much of their youth and innocence. Martella's character, Patrick, also got to spend some screen time with Norman Reedus's Daryl Dixon at the start of the show, establishing Daryl's "rock star" reputation in the prison community. The actor, who stars in Phineas & Ferb and has appeared in TV series like Everybody Hates Chris and movies like Batman: Under the Red Hood and Role Models, joined ComicBook.com for a conversation about his career, and playing Dead. ComicBook.com: You're a face and a name that people know. I feel like on most TV series, you'd have been billed as "guest star." Do you feel like The Walking Dead can't do that because the minute you're a "guest star" people just assume you won't survive the episode? Vincent Martella: Yeah! I mean, obviously on a show like The Walking Dead, it's a pretty unique situation. I feel like the only other show you could compare that to would be Game of Thrones, where people would just assume that meant they're dead pretty soon. So it's probably a pretty delicate procedure for how AMC handles those things, but they know exactly what they're doing and they've certainly done well so far. ComicBook.com: Most established shows, they're hesitant to shake up the cast chemistry but when this season started, they rolled out a bunch of new characters, and even though you're in and out, your appearance certainly leaves a mark. Was it interesting coming into a unique group dynamic like that, where it's not just you and the cast, but it's you and a whole group of other new people, and the cast? Martella: Yeah, it was definitely interesting being a new element to the show and as you said, Patrick kind of sets in motion this chain reaction of a lot of craziness within the group right now. So it was really great for me to be able to play a part that's going to be a catalyst for quite a lot of trouble in a variety of ways. It was definitely very interesting. ComicBook.com: Gimple told them on Talking Dead that Nicotero instructed you to play like Daryl is kind of a rock star. Was that easy, since you got to see how people actually interacted with Reedus? Martella: I think it was just easy for me personally because I've watched the show since the very first episode and I'm a fan of Norman Reedus's work. He's a really talented actor and just a very cool guy in general. So it wasn't too difficult for me to be playing very excited to get to work with him because I was very excited to get the chance to. He made it really easy because when he's playing Daryl he's just being incredibly smooth and awesome, so it was pretty easy for me to react off of that. ComicBook.com: You've got a pretty decent body of work in the geek community, here. You fit in nicely with the Walking Dead/Comic-Con crowd. Do you have anything else that will appeal to our audience? Martella: Yeah, I've definitely been fortunate to have worked on a lot of projects like that, you're right. I did Comic Con for Under the Red Hood, where I got to play an incarnation of Robin that hadn't been done before in an animated series. I'm there every year for Phineas & Ferb and also I work on the Final Fantasy games now. I've played the character of Hope in two Final Fantasy games already and I'm also working on a new one now--The Lightning Returns. So that's my new big project that I'm working on; people love Final Fantasy and it's got a really loyal following and people have been great with their reception of the character I'm playing so I've got another one of those games coming up pretty soon. ComicBook.com: You got to play off of Chandler Riggs on The Walking Dead, who is one of those guys who is constantly in the conversation as one of the best young actors working. It's so rare, too, that he gets to spend screen time with someone who's within ten years of his age group. Did you guys get a bit of time to spend some downtime on set so that he wasn't spending the whole time doing video games with Reedus? Martella: Chandler is awesome. I really enjoyed getting to know him. He's an incredibly talented actor and a really nice guy. We ended up hanging out while we were shooting a bunch just because we were working together and we had a lot of common ground when we were talking; we related to each other very well. Then we ended up going to see a movie when we were done working. His dad was on set, so we would all eat lunch together and stuff like that. He's just a really cool guy and I was glad I got to know him on a personal level as well as getting to work with him because as you said, he's being considered one of the best young actors on TV and I definitely think he is; he's got talent well beyond his years and it's really great watching him grow in the series--watching the things that he has to do for his character arc. 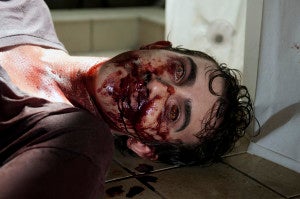 You did get to reanimate, which is one of those things the cast members always want to do. Is that one of those things you can tick off your list, when you go to work on The Walking Dead? Martella: Oh my God, it totally was. That was something that a lot of the crew was saying too, was "Do you know how lucky you are? As an actor to be working on this show, where you get to do a thing that everyone on the show wants to do, which is that you have lines, you have a part, and you get to establish yourself as a character...then you get to die in a cool way and come back as a walker!" Everybody doesn't get to do that and I know that I'm very lucky to get to do that, especially with Greg Nicotero directing me because he is the master of that genre and he walked me through the entire process and made sure I knew all the details of what I was doing. As an actor, too, getting an opportunity to do something like this? It's very specific to be on a show like The Walking Dead, but also to be able to have that opportunity is certainly like, "Check that off the bucket list." There are certain genres and certain things that you hope you get a chance to do and I'm really lucky to have gotten a chance to do this on The Walking Dead because it was so much fun. ComicBook.com: And we're getting to that point with The Walking Deadwhere unless you're working on a Romero movie, this is THE zombie project to do, right? Martella: Yeah, it definitely is. I think nobody really expected right off the bat that The Walking Dead would be quite as amazing as it was. What it's able to do with the horror genre is to introduce it weekly to everyone's lives in a way that I don't think has ever truly been done before. It's one of the true opportunities that an actor's going to have and so the fact that I got to do it was really, really fun. I don't know where else I'd get to see so much blood and be involved in so much FX makeup and get a chance to pop in some zombie contacts in this prison that they built out in Georgia. It's definitely a special experience and one you can only get on The Walking Dead so I know I'm definitely lucky. ComicBook.com: As somebody who's been watching for the whole run, is there anything you didn't get to do, that you'd have liked to or anyone you'd have liked to work with? Martella: I guess something that I would have liked to do is to have killed a few walkers; that would have been cool to be involved in a fight with the walkers, that would have been fun--a fight that I would win. More scenes with more of the main cast would have been cool because I really love all of their work on the show and even getting to do brief work with all of them was great. When we were shooting the first episode I actually got to have a really lengthy conversation with Andy Lincoln. It was very funny; we were shooting the shower scene from the end of the first episode, so I had my contacts in and makeup on and blood all over my face and I was soaking wet, and this mysterious figure--because you can't really see very well when you have the contacts in--came over to me and it was Andy Lincoln and we ended up talking for like an hour, hour and a half while they were setting up the next shot. He's such an interesting guy and so incredibly cool so I guess I wish i got more opportunities to act with these actors who I admire. ComicBook.com: It's got to be kind of a unique thing to spend the better part of an episode building up a character that was interesting enough to get emotionally invested in it, and interesting enough that people weren't frustrated when it cut to you instead of the leads, only to kill him off in the first episode. Is that kind of a weird emotional journey to go on in the span of an episode of television? Martella: Quite a few people have told me that they felt the same way, so I'm glad that came through in the performance and in the storytelling. Because that's so much the writing--that's all them. But it definitely was interesting for me because you have to establish this character as someone who's incredibly sweet and really likable right off the bat; somebody who's so excited to get to meet Daryl. And also he's this more innocent, immature friend for Carl. I had a few people come up to me at the premiere and say they were very sad when they see Patrick die because they were hoping to see more, they were interested to see where my character was going and they liked what I was doing with it. And that's very flattering to me because as you say, you have one episode to kind of create and establish this character that you hope people have enough of an emotional connection to to really not want him gone and really be bummed when they see that happen to the character. You want that to really resonate with them and then they come back next week to see what happens as a result.