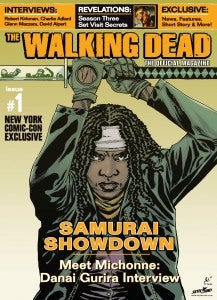 , the comics-and reportage hybrid that evokes the feel of Image Comics's Creator-Owned Heroes but is all zombies, all-the-time, will have a special, collectible exclusive cover made available at New York Comic-Con next month, and ComicBook.com has an early look at the cover. Featuring the fan-favorite, sword-slinging heroine Michonne, the cover will have the look of the comics, but it'll feature an interview with Danai Gurira, meaning that even this Michonne will be pretty TV-friendly. Check out the cover at right and the official words on it from the New York Comic Con below. The Walking Dead returns to TV on October 14, the final night of the New York Comic Con, and the magazine will hit the stands on October 23.