Rick and Michonne have been living on Easy Street since arriving in Alexandria. Well, maybe not, but by comparison to everything they had gone through to make their way into the Safe-Zone, laying in bed eating apples and fighting off the occasional pack of Wolves is a breeze when you remember Terminus, the Governor, and all of the other awful things along the way.

Easy Street turned out to be a dead end when Negan came to town.

Rick's group now answers to Negan and his Saviors. In fact, Rick openly admitted to all of Alexandria that he is no longer in charge and has relinquished all power to the new leatherclad villain. Michonne, the first lady of Alexandria, is none to proud to see her man bowing down to this new group of enemies.

Michonne disagrees with Rick's lack of intiative to fight so much that she hides a rifle from him and uses it to go out and train in an effort to prepare for battle. By the end of the episode, Rick forced Michonne to hand over her gun and bow down to Negan as he has. She was not happy.

According to Michonne actress Danai Gurira, the new problems Alexandria is facing are going to continue causing friction in Rick and Michonne's relationship.

"At the end of the day, they have very, very different perspectives," Gurira says. "In the beginning of the episode, if you look at it, it's the same shot that you saw them in after they first made love, but now they're fully dressed and their backs are to each other. It's a whole different energy between them. I don't think they've probably even really had much physical contact since this has happened, and they're really on different sides of how to handle it. I don't think they processed it. I don't think they talked about it, and the fact that he is really choosing to not go into action and deal with this the way they usually would is something that is causing her to retreat into who she used to be, which is someone who does things on the sly. She's now going off by herself and practicing her own methods of how to handle the situation because she has to in a solo way." 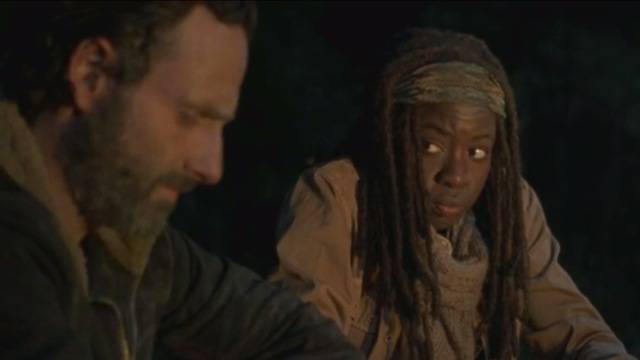 The first moment of friction between Rick and Michonne came at the end of Sunday's extended Service episode.

"All those things are a friction point," Gurira said. "When he says, 'I need the gun," and she says, 'What?' It's the first moment we've ever seen between the two of them where there's a touch of deceit. That is a friction moment. It's so sad. What's so sad to me is we're shooting that because you could see, she was like, "I'm a lie," and he could tell, and you just notice that hurt him to see that.

"The next moment where they discuss about the gun. The next scene where he's like, "Did you hide any more?" There's that moment where she's seeing him not be sure. He knows who she has been, who she was when they first met. This is all these things that come up when there's tons of frustration, and yet, he needs her to be on his side. She tries to, by the end of that scene, you're right, she tries to, but the point of the matter is, at the end of the episode, we see her at a place where we don't know what way she is going to go next because that moment is really about that trying that she was trying to do."

Michonne's rifle training (which prompted fans to expect some big comic book moments) was more than just a preparation for battle, though. It's all part of a grander idea to unite with the other groups and take down their oppressor.

"That's why she went out by herself, to get herself together, and try to align with the idea of cooperating with these thugs, and seeing how they're psychologically trying to break them and enslave them," Gurira said. "Just taking their mattresses and burning them just to eff with them. That takes her to a place where who knows if she can live with this or not, if she can stay aligned with Rick on this or not. Her heart and soul and her mind are not aligned, but her love for him is what's making her try."

The Walking Dead: Danai Gurira Says There Is Friction Ahead For Rick And Michonne