Friendships can be difficult to maintain in the world of professional wrestling. Everybody wants to be the top guy and no amount of camaraderie is going to get in the way of obtaining the ultimate prize of being World Champion.

Recently we've seen some interesting break-ups from the dysfunctional relationship of former best friends Kevin Owens and Chris Jericho to Sunday night's swerve of a James Ellsworth turn on his buddy Dean Ambrose at WWE TLC (for incredibly delusional purposes). The betraying partner trope is an old storytelling device that WWE and wrestling companies keep using because it's very effective. You make an instant hero and villain from the breakup and hopefully that elevates both stars accordingly.

True, not every breakup delivers those results, but that's not what's really important. What's important is watching the drama unfold and wondering if the two parties can make amends later down the line.

Let's take a look at some of the biggest breakups in WWE history that we're still feeling today.

Kevin Owens and Sami Zayn have been friends for more than ten years. They performed around the independent circuit together and both achieved success in various promotions. Eventually, both men were signed to the WWE and headed to their developmental brand, NXT.

It was there that this friendship turned deadly as Zayn had become NXT Champion that Kevin Owens attacked his friend and declared himself next in line for the title. Owens would become successful in claiming the title against Zayn and would invade the main roster as the NXT Champion calling out the man himself, John Cena.

Continuing over from NXT, Zayn never forgot or forgave Owens for his betrayal and although he would come up many times on the losing end against his former best friend, it seems these two challengers are deemed to fight forever.

The Rockers No More

We all know the story by now and for those old enough to have lived through this, we remember where we were when we saw it go down.

The Rockers had slowly been drifting apart in the past year or so and having not won the WWE Tag Team Championship began to eat at Shawn Michaels and in 1991, after teaming together for six years, Michaels kicked his opponent through the Brutus Beefcake's Barbershop window set.

There had been talks and stories about their drama backstage and how it was his tag team partner Marty Jannety that almost cost Michaels his job, which Jannety has disputed. Following their break up, Micheals went on a singles career that established him as one of the greatest wrestlers of all time.

Jannety on the other hand went to form the New Rockers with Leif Erickson (aka Al Snow) and became a one-time Intercontinental Champion, but it was here the first stone was cast and Michaels set out on his own. 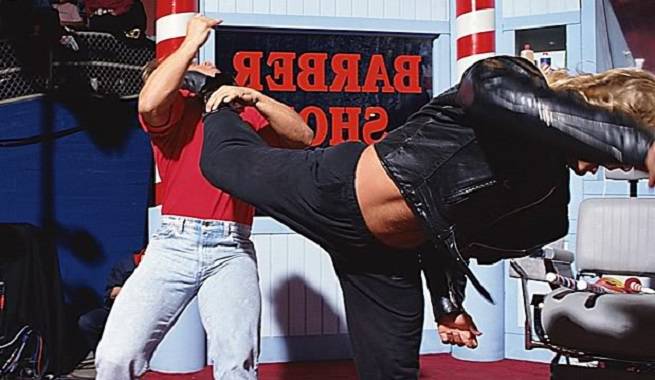 The Shield was without a doubt the hottest wrestling faction in a long time.

Consisting of three up and comers in the WWE: Dean Ambrose was the mouthpiece, Roman Reigns was the protection, and Seth Rollins was the brains of the outfits, the Shield debuted at Survivor Series 2012 to help CM Punk retained his WWE Championship against Ryback and ignited a revolution in the WWE.

Having proved their skills in WWE's developmental territory, the three men quickly rose to the top of the card with Ambrose becoming US Champion, with Reigns and Rollins as Tag Team Champions. Sadly, all good things must come to an end.

In June of 2014, Seth turned on his brothers attacking Roman first then taking out even more aggression and frustration out on Dean as he aligned himself with the Authority, becoming Triple H's new pet project. Seth surpassed Ambrose and Reigns by winning Money In The Bank that year and cashing in at WrestleMania to become WWE World Heavyweight Champion.

The angle was such a success it's now the focal point of BOOM! Studios' new WWE comic. While the Shield had a reunion of sorts at Survivor Series this year, you have to really wonder if all is forgiven.

WrestleMania XV had a lot of twists and turns before getting to the main event of the Rock and Stone Cold for the WWE Championship and they were centered around one man: Triple H. Triple H declared himself the leader of D-Generation X after Shawn Michaels "dropped the ball" against Stone Cold the previous year at WrestleMania XIV losing the WWE title and promptly stepping away from weekly in-ring action for four years.

Triple H declared himself the leader of D-Generation X after Shawn Michaels "dropped the ball" against Stone Cold the previous year at WrestleMania XIV losing the WWE title and promptly stepping away from weekly in-ring action for four years.

Under Triple H's leadership, DX recruited the Road Dogg (formerly the Roadie Jesse James) and Billy Gunn, who had adopted the moniker "Badd Ass". Also returning to the WWE was Sean Waltman, no longer the 1-2-3 Kid, he had dubbed himself X-Pac. DX was officially an army of five ready to take the wrestling world by storm.

And God did they ever.

Triple H had become a top star in the company, getting closer and closer to being considered in the same circle as the Rock and Stone Cold who highlighted most of that year. It was at WrestleMania though that the story took an interesting turn.

They had already lost Chyna to the Corporation earlier that year, but during Triple H's match with Kane, Chyna interfered and helped secure the win for her former DX comrade. All arrows pointed to a stronger and reunited D-Generation X once more.

Chyna distracted the referee and when it looked like Triple H was going to give Shane a Pedigree, he turned on X-Pac, hitting his signature move on his teammate giving Shane the win and retaining his title. From this betrayal sparked a path that would lead Triple H to the biggest push of his career yet, and ultimately becoming WWE Champion in August of that year.

"Macho Man" Randy Savage and Hulk Hogan are once in a lifetime superstars. They transcended the realm of professional wrestling and became pop culture icons in their own time.

Now, there is no need to air the backstage business of what these two actually did and said to each other, that's a whole other story by itself that could fill volumes. The story here was that Savage became suspicious of Hogan's intentions with his manager and real-life wife Ms. Elizabeth. Since becoming WWE Champion at WrestleMania IV, it seemed that Hogan was happy for his friend and helped in any way he could to make sure he stayed out on top.

Things culminated when Savage took what was a friendly embrace between Hogan and Elizabeth as something more and the match was set for WrestleMania V, with Savage putting his WWE Championship on the line. The two titans of the industry looked to be unstoppable unified, but apart they were on their own in a world where looking out for number one is the way of life.

Hogan would go on to defeat Savage and become a two-time WWE Champion and Savage would win King of the Ring and adopted a heel persona of the Macho King. Savage left Elizabeth for Sherri Martel but later reconciled at WrestleMania VII.