After the debut of Kefla, and rumors of Piccolo getting a new fusion power-up, or Gogeta making a return, Dragon Ball Super fans' imaginations have been running wild - and we've seen some great artwork as a result. Take today's piece, for example:

[OC] "Enter Gohanks to the Battle" from dbz


That's Gohanks, the Gohan / Trunks fusion achieved through the Potara Earrings method, and as imagined for the Dragon Ball Super franchise.

Right now, Trunks is helping Goten and Marron guard Android 17's island - but as we get closer to the next arc in the "Universe Survival" saga, there's no telling what threat arise. Maybe Gohan and Trunks will have to step their respective games up - and we can only hope it looks like this!

If you enjoy that artwork, check out this drawing of What Ultra Instinct Gogeta Could Look Like. 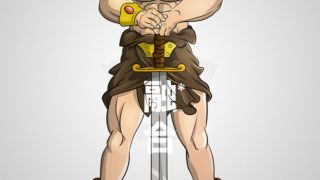 'Dragon Ball Super': Here's What Gohanks Could Look Like

The Legend of Korra Shines in This Impressive Live-Action Teaser