Chuck Palahniuk, author of the original Fight Club book and it's 10-issue comic series sequel, announced recently that he is once again collaborating with artist Cameron Stewart for another sequel.

This new installment will see the story's central character Tyler Durden dealing with impending fatherhood as, when the story begins, Marla is pregnant with his child. Add to that the threat of a new enemy and the sequel will see Tyler teaming up with the series narrator -- who is now calling himself Balthazar.

"Fight Club 3 is about what happens when you need to team up with your enemy," Palahniuk said in a statement. "And the situation is even more complicated here, given Tyler Durden and Balthazar's unique relationship. And, yes, bodily fluids will be exchanged."

Fight Club 3 marks the third installment of Tyler Durden's story and the second to be told in comic book form. The first installment is the 1996 novel Fight Club which was adapted into a movie in 1999 by director David Fincher. That film starred Brad Pitt and Edward Norton and has become a cult favorite. Fight Club 2, published in 2015, picks up the story a decade later. It's not clear what the time jump will be between Fight Club 2 and Fight Club 3. 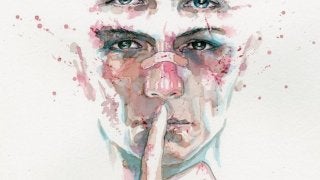 will run for 12 issues and is set to hit stores on January 30, 2019 with variant covers by Duncan Fegredo (Hellboy), Kirbi Fagan, and David Mack (Cover). You can check those out in the gallery.

You can check out the official solicitation text below, and the covers in the attached image gallery.

Tyler Durden is back, looking to chalk up some more conquests. But a new movement has replaced Project Mayhem and even Tyler doesn't know how to play by these rules.

A strange picture frame provides a glimpse into another world, but it might not be as idyllic as it seems.

Are you excited for Fight Club 3? Let us know your thoughts in the comments below.