AfterShock's new series Lost City Explorers shows what can happen if you see life's curveballs as a challenge and not a stopping point.

The new series comes from writer Zack Kaplan and artist Alvaro Sarraseca and focuses on five friends who happen upon an adventure in the most unlikely of places after a mysterious disappearance. Mel will do anything to find out what happened to her father, and that journey will take her and her friends underneath the city they call home, and in no way are they prepared for what they're about to encounter.

Did someone say Atlantis? Yeah, they aren't prepared.

Suddenly things like college applications and summer jobs won't seem as important, and while Mel's a bit lost these days, this new adventure might be the world-changing meaning to her life she's been looking for. Now let's just hope this ragtag group can survive what's in store for them.

If you're getting some Goonie vibes here, Kaplan recently revealed that is definitely an inspiration for the series.

"I've always been fascinated by urban exploration and what underground secrets a city holds," Kaplan told THR. "I grew up on The Goonies, so I remember wanting to go looking for lost treasure or mythical wonders in my backyard. And what's more mythical than the Lost City of Atlantis? This is my millennial spin on all that, something personal, empowering, dark, challenging: a gritty, modern adventure story." 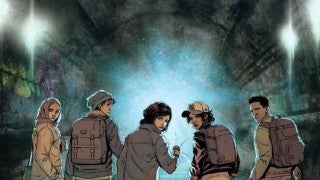 You can check out our exclusive preview of the big first issue in the gallery, and you can find the official description below.

Lost cities aren't just the stuff of myths. They exist hidden right under our noses. But when a mysterious expedition is disrupted by supernatural activity, and an antiquities professor goes missing, his teenage daughter and her friends must become underground urban explorers, follow his tracks on a coming-of-age journey through subterranean tunnels, and ultimately find the holy grail of lost city: Atlantis buried right under New York City!

Nintendo Sale Makes Over 50 Switch Games All Just $0.49 Each

N64 Classic Now Available to Play for Free for Some