If you ever find a magical amulet, you might want to be careful about picking it up, or you could find yourself knee deep in ancient wizards, kidnapping, and mutton.

Okay, the last part isn't so bad, but the rest of it isn't the best. You can see how Sage and her ragtag crew are handling the situation in our exclusive preview of Dark Horse's Modern Fantasy #2. Sage, Gondra, Lizard Wizard, and Darquin have their hands full trying to get Fentax back from the mob, but the good news is they have a plan...after LW gets more mutton that is.

More questions present themselves, including why and how the magical amulet keeps moving from owner to owner. You can find the answers to that and more in Modern Fantasy #2, and our full exclusive preview can be found in the gallery.

Modern Fantasy #2 is written by Rafer Roberts and drawn by Kristen Gudsnuk. The official description is included below.

"Sage's life has been turned upside down by a mystical amulet she recently obtained, that may bring about the end of the world as she knows it. But when the goblin thief's life is ransomed for the amulet, Sage and a team of friends must figure out a way to save him and themselves while protecting the greater good." 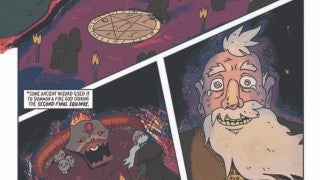 "Modern Fantasy follows three friends, new to the big city, as they struggle to keep their crappy day jobs and pay off their student loans. A young Ranger woman, her drug-dealing reptilian wizard roommate, and her boisterous Dwarf maiden BFF as they embark on a modern day quest to save the world. The roommates become embroiled in danger when one of their significant other's finds himself taken by criminals, and the trio must get their $#!& together to save him."

Modern Fantasy #2 is in comic stores on July 25.