Later this week, DC will revive their dormant Metal Men franchise with a new look and feel from writer Dan DiDio and artist Shane Davis. In the first issue, here's how DC describes the journey into some familiar (and dangerous) territory from the recent past: "The Metal Men are back! And back and back and back again, as we take a deep look into Doc Magnus' lab as he experiments with what it means to be sentient. Meanwhile, a mysterious liquid Nth metal has appeared in the science site at Challengers Mountain that appears to have come through from the Dark Multiverse..."

DC has provided ComicBook.com with an exclusive first look at the series' first issue. You can check it out in the image gallery attached below.

"I always love just the complete craziness of the situation, and just the incredible likability of the characters and their relationship with Magnus," DiDio told us recently. "As a kid, I used to get the comics themselves, one of the few comics that I got semi-regularly. So I always remember just the insanity of just the events and characters that would come in and out. And it's one of those things that stays with you. I mean, the funny part of when Mike Carlin was actually writing Metal Men, or just right after that, I was working at ABC Children's Television, and I actually was developing Metal Men as an animated series. And the first time I met Mike, we were discussing Metal Men. When Jenette Kahn gave me a walk through the DC offices." 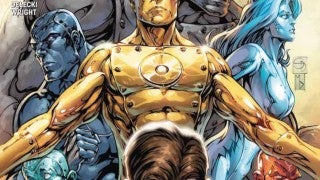 Like so many of the stories DC told during its "Rebirth" era a few years back, Metal Men will attempt to make sense of a number of different and sometimes contradictory takes on the characters and their mythology.

"That is definitely a big story point," Davis explained. "It's not something that we just put everybody in it to say, 'Hey, let's have a nice double page spread of everybody together.' Dan, when he pitched it, had a story, and we kind of just worked. It's very together. I don't know how to say it. I mean, that's a good angle for a story. Sometimes people just do that to say, 'Oh, here's a nice shot of all the superheroes together,' but there's a story behind this. So, Dan had a really good concept and story, and it works out that we're able to tie in all that Metal Men lore and different versions together in this story."

You can pick up Metal Men #1 from your local comic shop or online through ComiXology, Amazon, Barnes & Noble, and the DC app on Wednesday.