DC has provided ComicBook.com with an exclusive preview of Supergirl #25, on sale tomorrow in stores and online, which features the heroine (along with Krypto and Brainiac-5) arriving at the site of Krypton's destruction to investigate claims made by Rogol Zaar back in The Man of Steel.

That journey has been a difficult one for Kara, who has had to face some hard truths about her past and her homeworld as well as looking inward for answers as to why she needs so badly to know.

"The attitude she had in Man of Steel is understandable. She found out that not only was her planet's tragedy not an organic one, it was a planned one, but like she said to Clark in Supergirl #21, 'for you, Krypton's destruction is theoretical. For me, everyone I knew is dead,'" Andreyko told ComicBook.com. He said that he tried to go back through the long, wild history of Supergirl and to pull in the elements from each version that worked best.

"That's why her not really dealing directly with her survivor's guilt, and now this rage and this need to find out: 'Was everyone I know murdered?' It allows her to, by the end of this journey, be a fully realized lead character and let her sadness and her anger go and be happy with who she is, and enjoy life and not be an Italian widow who, after her husband dies, never socializes anymore," Andreyko explained. "She's putting so much pressure on herself to not 'disrespect' the memory of Krypton, she's not able to enjoy her life right now. When she gets her answers, even if it's not the answer she wants, she can move on." 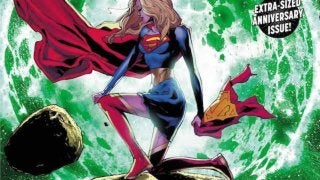 You can check out the preview pages in the attached image gallery, and the official synopsis below.

It's a super-sized issue of SUPERGIRL!

Supergirl and Krypto go back to the "scene of the crime"—the ruins of Krypton! With Z'ndr hitchhiking, Supergirl is not only there to find clues on who the killers of Krypton are, but to pay her respects to her dead family and friends for the first time since she left the planet. But a mysterious caretaker whose duty is to protect Krypton's remnants at all costs attacks and won't let Kara through! As if that weren't enough, the Kryptonian powerhouse and her super-powered pooch are stricken with radiation poisoning from the dead planet and must also fight their inner demons!

This anniversary issue also includes two backup stories! First, witness the thoughts and fears of Krypto as he is affected by the radiation poisoning from the wreckage of Krypton. Then, learn more about our new hitchhiker, Z'ndr Khol, as he scavenges a booby-trapped ruin in a remote corner of the galaxy in an off-the- wall space adventure!