Sometimes heroes appear in the unlikeliest of places, and that is definitely the case for Aquaman actor Jason Momoa.

The actor has quickly become one of the best parts of the Justice League trailers and press conferences, but producer Deborah Snyder reveals it was a session of Sunday night TV that paved the way for him.

"We're big 'Game of Thrones' fans," Snyder told the LA Times. "I remember Jason Momoa [as Dothraki chieftain Khal Drogo]. Zack was like, 'Jason would be the perfect Aquaman.' I was like, 'It's so out of the box. But yeah!' He can be tough. And he feels like he comes from the water."

That happened over three years ago, and he would make this debut in Batman v Superman: Dawn of Justice. It isn't known if he at one point had a bigger role in the film, but in the final version, he appeared via archived footage that also showed glimpses of Cyborg and The Flash.

It appears that decision was a good one, as even in the first footage from the film Momoa's Aquaman commands the screen every time he's on it. Not only that, but he seems to provide some much-needed comedy, especially when alongside a more stoic Batman. 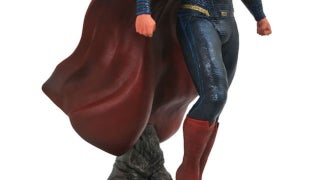 While fans are excited to see Aquaman on the big screen, Momoa has warned in the past that it won't exactly be the hero they know from the comics, at least not yet.

"Really, it's a huge growth for me," Momoa told SFX Magazine. "It's a gigantic arc for Arthur Curry. It may be tough for a lot of fans to watch what they're gonna see, how I portray him. But you gotta wait until we get to the solo movie to really know. Because he's not king yet. He doesn't believe in himself, he doesn't know what to do with the powers he has. He's going through tons of loss. He hates Atlanteans. The fact that people are calling him 'Aquaman' right now — he couldn't give two shits about anything Atlantean. So he's really not quite there yet. That's kind of tough to play. We gotta figure out the origin, where we're going. Some people will be like, 'This isn't my Aquaman.' But we're not there yet."

Fans can judge Aquaman for themselves when Justice League hits theaters on November 17th.

Why Jason Momoa Was Selected as Aquaman

James Gunn Teases Possible Cameos From The Suicide Squad Stars in Guardians of the Galaxy Vol. 3