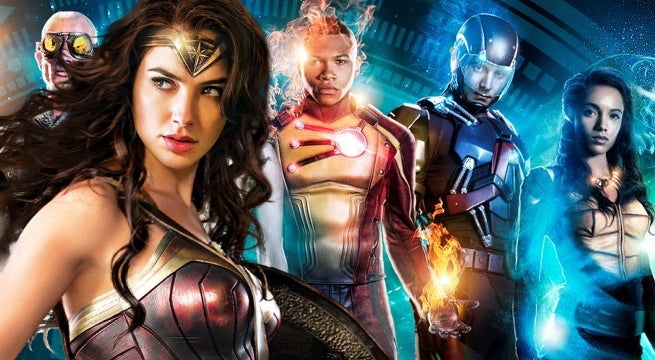 Spoilers for tonight's episode of Legends of Tomorrow, "Helen Hunt", below!

Tonight's episode of Legends saw the team trying to locate Helen of Troy (Bar Paly), who had been displaced in 1930s Hollywood. The Legends ultimately got to Helen, who quickly became inspired by the female Legends' confidence and fighting abilities. So when it came time to return Helen back to Troy, Zari (Tala Ashe) quickly developed a different plan.

Zari altered the records to have Helen disappear halfway through the Trojan War, and instead dropped her off on an "island full of warrior women" in the same time period: Themyscira. As DC fans will know, Themyscira has major ties to DC Comics lore, seeing as it is the birthplace of Diana Prince/Wonder Woman.

“I love it," Ashe revealed during a recent set visit. "It really works for the story, and I think in general the next episode is very female-strong, and so it’s appropriate I think that that’s the last moment you see in the episode.”

"It was cool, really cool. So Gal Gadot is coming on the show," Caity Lotz, who plays Sara Lance/White Canary, joked.

In reality, Wonder Woman might not be appearing on the Arrowverse any time soon, considering Gadot's highly successful performance on the big screen. But Wonder Woman's presence in the Arrowverse has been a bit of an enigma, with her being discreetly referenced on The Flash's answering machine and in an advertisement for Supergirl.

But still, this scene does prove that Themyscira existed within the Arrowverse, further developing the world's lore. And it sounds like fellow Legends cast member Maisie Richardson-Sellers was happy about that connection.

"I think it’s awesome!" Richardson-Sellers, who plays Amaya Jiwe/Vixen, revealed. "Yeah, I mean. That’s what I love about the comic book world, is when you can tap in to different worlds, like Constantine, it’s going to be fantastic as well. And just sort of mixing up, you know, we saw Wally West at our first episode, and so it’s just really playful to be able to jump around, and I think Wonder Woman has paved the way brilliantly, proving that female focused movies and TV shows can be a huge success. So I think that was a very affectionate shout out. I liked it."

Legends of Tomorrow airs Tuesdays at 9/8c on The CW.