Man and Superman, originally conceived as a four-part story for the long-cancelled Superman Confidential, finally sees the light of day today — and it is one of the best Superman stories DC has published in years.

The story, written by comics legend Marv Wolfman and featuring art by Marvel vs. DC artist Claudio Castellini, colors by Hi-Fi, and letters by Tom Orzechowski, centers on the time between when Clark Kent came to Metropolis from Smallville and the day he finally put on the Superman costume for the first time.

As such, much of the story is a contemporary repaint of familiar beats: Clark meets Lois, Perry, Jimmy, and Lex Luthor for the first time throughout the life of the story; he struggles to make an impression with Perry and land a job at the Planet; he struggles with the pressures of his super-senses being inundated with the cries of millions of Metropolitans. It is done through an intimate point of view, though. Comparing it to something like John Byrne's The Man of Steel, Wolfman's story feels like it is being told to us by Clark, rather than relayed to the reader through an intermediary.

While the position is not completely without its detractors, a generation of fans raised on the work of Wolfman, John Byrne, Louise Simonson, Dan Jurgens, and others would tell you that Clark Kent is the "real" man, while Superman is a disguise he constructs in order to protect his friends and allow himself to have a life. If that is true, then one of the most significant elements of Man and Superman is the way this story taps into Clark's hopes, fears, loves, and insecurities, presenting a tale of an idealistic young man on the path to becoming a legend.

In his introduction, Wolfman acknowledges that a story with relatively few superheroics — he describes the tale as a character-driven mystery — struggled to find a release window following the cancellation of Superman Confidential. Man and Superman has, thus, been sitting in a drawer somewhere for a decade, which seems almost criminal. That feels like a real shame, considering that Wolfman's exploration of Clark (the "real hero") is head and shoulders above anything DC has published since the turn of the century, with the notable exception of Dan Jurgens' Superman: Lois and Clark. 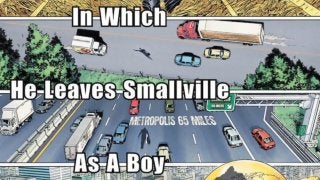 Castellini captures Clark Kent and the world of Metropolis beautifully, drawing heavily from the late '80s-through-mid-'90s era that Wolfman helped to shape. Much of Metropolis's architecture calls back to the cityscape of that era, and even Clark's wardrobe, expressions, and body language are somewhat reminiscent of what Kerry Gammil and Bob McLeod used to do with the character. The story does this without feeling like a period piece, though (although since it was originally set "ten years in the past," we do get some quaint late '90s/early 2000s technology and pop culture references in the book).

There are also winks and nods, if you know where to look, to various eras of comics, film, and TV stories, including a between-the-panels transformation of Clark's apartment that feels like a reference to the super-speed remodel that he did in the Lois & Clark: The New Adventures of Superman pilot.

Castellini manages to incorporate all those references while still making the world his own. If you enjoy Castellini's work, it will be difficult to miss some of his idiosyncrasies in the story, and his frenetic-bordering-on-chaotic page layouts keep the story flow moving even when what's going on is just Clark Kent wandering around a crime scene with a stocking mask looking at stuff.

His facial expressions are a big part of what sells the work, too; Wolfman is telling a slow-burn story driven by character, and Castellini delivers a number of pages that would stand shoulder to shoulder with guys like Bart Sears and Kevin Maguire in terms of expressions and body language.

One of the things that people like to associate with Superman more than almost any other superhero is that he's "here to help." This book does a great job of showing that, as Clark struggles to find ways to do the most possible good in the world while resisting the call of his destiny and the encouragement of his parents to put on the costume.

Man and Superman fits into the mold of Mark Waid and Leinil F. Yu's Superman: Birthright in that it is technically a new origin story, but changes so little and fits so nicely into the existing framework that the story could either be a standalone Elseworlds-style tale or fully incorporated into the post-Rebirth backstory, and neither would be particularly surprising.

One element of the story that particularly stands out is the characterization of Lois. Wolfman mostly holds off from putting Clark face to face with either Lois or Lex in the early going, so most of what we see is Lois from Clark's point of view… and that is that she is a good reporter digging into a story he does not want her digging into (namely, reports of a flying man). That characterization gets fleshed out as the book progresses, and the way her relationship is written with Clark takes the adversarial/competitive nature of their relationship and twists it in a way that is contemporary, believable, charming, and ultimately elevates both Lois and Clark's characters. It's simple, masterful, and will be a salve to fans upset that Lois has been getting something of a bum rap in the last year's worth of comics.

Ironically, Wolfman himself wrote the Superman titles of the late '80s in the shadow of John Byrne's fame and influence, and never really made a huge impression on the character of Clark himself. The things fans most remember from the Wolfman run tend to be new characters and concepts he introduced, especially Cat Grant and Gangbuster. Seeing what he does here makes us wonder what that era of comics might have looked like if Wolfman had been given the free rein that Byrne was.

Man and Superman feels a bit like Spider-Man: Into the Spider-Verse; it is not what you might expect at first glance, but it is a near-perfect interpretation of the story its creators set out to tell, and the minute you finish it, you want to pick it back up and "go back into the movie," so to speak. With a little luck, this book will sell and DC will consider a Deluxe Edition hardcover with some script pages or something, because the slick cardstock cover is likely to get dog-eared on the copies of fans who want to re-read this one.

'Man and Superman' Review: A Near-Perfect Look at a Young Clark Kent

Composite Superman Funko Pop Exclusive Is In Stock and On Sale

DC Reveals New Look at Shazam! Fury of the Gods Tie-In Comic Co-Written by the Cast