Black Lightning is the network's most recent comics adaptation to become a solid ratings success. The network has several other comic book-related series, including Supergirl, The Flash, DC's Legends of Tomorrow, Arrow, Riverdale, and iZombie.

In these new posters, which you can check out in our gallery, reveals Jefferson Pierce (Cress Williams) as the titular superhero standing alone while the second poster brings his daughters, Anissa (Nafessa Williams) and Jennifer (China Anne McClain) front and center with him -- a move that is both a nod to the fact that both of the Pierce girls have powers of their own and that Black Lightning is, according to executive producers Salim and Mara Brock Akil, at its core a family show. 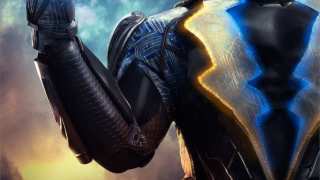 "I'm not really doing a show about a superhero," Salim Akil said during a recent set visit. "I'm doing a show about a man who has a family and is trying to affect his community. Someone asked me, what's the most difficult aspect of doing the show, and it really is me coming to terms with that he has powers, because I could write a whole script without him ever using his powers, which nobody wants me to do."

In this week's upcoming episode, "Black Jesus," the family aspect of the show comes into sharper focus. As we've seen in a promo for the episode, Anissa takes matters into her own hands when it comes to the violence plaguing Freeland. Anissa, who will eventually become the superhero Thunder, fights back and uses her newfound powers to defend herself against threats on the city's streets. And while the heroics are set to become a family affair on Black Lightning, according to Christine Adams, who plays Jefferson's ex-wife and the girls' mother, Lynn, the path to Anissa becoming the hero Thunder and for Jennifer's own powers is going to be an "ongoing struggle."

"It's going to be an ongoing struggle," Adams said. "I think what's interesting about Thunder is that she's reluctant. It's not something that she necessarily wants to do. She wants to be like a normal teen, like we all did when we were teenagers. You don't want to stand out. So, I think it's great that we're coming at it from that angle. I think the assumption is that if you have superpowers, it's go great and you want that -- but what if it's not?"