Louise Simonson and Jerry Ordway, who helped serve as architects of 1992's best-selling storyline "Doomsday!"/"The Death of Superman," are among the big-name talent coming together for The Death of Superman, a digital-first series from DC tying into the newly-released animated movie from directors Sam Liu and Jake Castorena.

Simonson wrote Superman: The Man of Steel for almost 90 issues, during which time she also worked on various tie-ins, annuals, one-shots, and spinoffs. She, with artist Jon Bogdanove, are best known for creating John Henry Irons/Steel, a character whose series she also wrote for the better part of three years...but to most, her work on "The Death of Superman," along with the co-creation of Apocalypse at Marvel, will always be the defining moment in her career.

"These are never-before-told stories of what happened before, during, and after the conflict with Doomsday that cost Superman his life," Simonson said in a statement. "To me, Superman is a man who leads a double life. He can manage it better than most because he can move at super-speed. He is hyper-aware of what's happening around him and is driven to combat evil because, in many cases, he's the only one who can. Each story will explore what power means — for someone like Superman who wields it for the good of humanity, or the villains who use it to further their own selfish agendas."

Jerry Ordway will provide the cover art for the first part of the series, which is being released digitally in small sections before coming to comic shops as a standard-sized comic later. Ordway wrote and/or drew various Superman from 1987 until 1993, when his final issue -- The Adventures of Superman #500 -- featured Superman's return from the dead.

Cat Staggs will be the first interior artist on the series, which will be weekly and run for 12 issues. 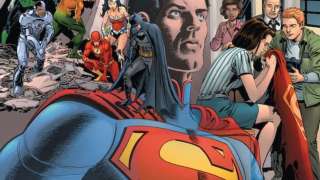 "The Death of Superman was such an earth-shattering moment in comics history and to be connected to that, even after all this time, is amazing," said Staggs. "Getting to draw Superman battle it out with his nemesis is a dream come true—and it is an incredible honor to get to work with Louise Simonson on this project."

Simonson, who has not worked consistently for DC in recent years, is also working on a young adult graphic novel adaptation of Wonder Woman: Warbringer for the DC Ink imprint.

The series is set firmly in the world of the animated series, featuring The New 52-styled costumes and a Justice League that features Batman, Wonder Woman, Cyborg, Green Lantern, The Flash, and Aquaman. In the original comics, the League that battled Doomsday consisted of Superman leading Booster Gold, Blue Beetle, Fire, Ice, Bloodwynd, and Guy Gardner (who at the time was using Sinestro's yellow power ring).

Based on the preview pages in the attached image gallery, the first issue appears to deal with a disaster on board the Excalibur spacecraft -- which in the comics crash-landed on Earth but in more recent retellings has taken place in orbit. The eventual result of the event is the creation of the Cyborg Superman (Hank Henshaw), who will play a role in Reign of the Supermen, next year's follow-up movie to The Death of Superman.

"When they said they were doing it, I knew it was going to be a big deal," Jerry O'Connell, who plays Superman in the animated movie, told ComicBook.com during an interview at Comic Con. "I thought they did a great job of an homage to the original source material and also putting new spin on it. Warner Animation is the best as far as I'm concerned."

The Death of Superman remains one of DC's all-time best-selling graphic novels, and continues to find a life in the bookstore market where, executive producer James Tucker acknowledged at Comic Con, "it's the only Superman story most people have heard of." Adding a second volume to that evergreen stock must seem like a no-brainer to DC, and the inclusion of Simonson, whose character-driven approach to writing is said to have shaped "Funeral For a Friend" and some of the story's most memorable moments, links it with the original.

The Death of Superman Part One #1 is available now on ComiXology, Amazon Kindle and Barnes & Noble Nook.

'The Death of Superman' Movie Gets a Comic Book Tie-In