The CW has released photos for next week's episode of The Flash, "Harry and the Harrisons".

The episode will see the return of Amunet Black (Katee Sackhoff), but instead of being an adversary for Team Flash, the team aims to recruit her as an ally. It turns out that Amunet is immune to Clifford DeVoe/The Thinker's myriad of powers, an advantage that the team needs as they try to stop him from bringing his so-called Enlightenment online.

You can check out the photos in our gallery below. 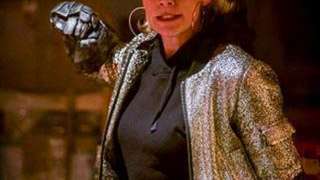 Working with Amunet isn't exactly Team Flash's first choice. As has been pointed out in the preview for the episode, Amunet ruined Iris' (Candice Patton) bachelorette party and kidnapped Caitlin (Danielle Panabaker). Joe West (Jesse L. Martin) isn't wrong when he calls her a criminal, but Team Flash hasn't had the best track record against The Thinker. The villain has managed to outsmart them or out power them in nearly every confrontation. Having someone immune to The Thinker on their side might just be their only hope.

The episode will also see the return of the Council of Wells. Originally appearing in "When Harry Met Harry", the Council of Wells was a group of Harrison Wells doppelgangers from various Earths in the multiverse who came together in the hopes of getting ahead of The Thinker. It did not work and was quickly disbanded, but Harry's ambition and desperation have grown throughout the season, and he has been using a Thinking Cap to amplify his own mental capabilities.

"This year, I've pulled out the ones that I wanted to at least get out right now, but we've got plenty more in the bucket," admitted Cavanagh at the time. "When I do different characters on the show, my goal is to try and fill gaps that we have and openings that we have on the show."

The last time we saw the Council, we were introduced to Wellses from Earth-12, Earth-22, and Earth-47 along with a cameo from a Gandalf-inspired Wells. What new versions of Harry we might see remains a mystery, but Cavanagh has said that he has plenty more up his sleeve.

"I remember Steve Van Zandt saying that Bruce Springsteen always has a number of songs in the scrapbook, ready to go," Cavanagh said during a set visit earlier this season. "Steve's quote was, 'It's really annoying.' I'm that way with characters. I have a number of them. It's just a question of, 'Well, do we want ten? Do we want two?' We had a number of them at first. I was like, 'Listen, the show The Flash should be about the Flash, and not about Wells. So, what will happen is if we do ten, we will end up cutting all their stuff because we can only really afford to have three or four scenes in this arc. We thought it best that we pare it down.' We went from 10 to six to four, or so. And, so, I think it's unfortunate the Russian didn't see the light of day. But, if this show keeps going, there will be plenty of time."

The Flash airs on Tuesdays at 8/7c on The CW. "Harry and the Harrisons" debuts on May 8.

'The Flash': Amunet Black Helps Team Flash in "Harry and the Harrisons" Photos