"Evil's Might," the current story in Green Lanterns from writer Dan Jurgens, could serve as the ideal way to reintroduce the titular heroes' weakness to yellow.

When John Broome and Gil Kane reinvented Green Lantern in the late '50s, the original hero's weakness to wood was replaced by one to the color yellow -- which became one of the most widely-derided comics weaknesses, and has not been used regularly in years.

The "yellow impurity," it was explained after the Silver Age revival, was a weakness in the central power battery that the Green Lantern rings drew their power from. The impurity rendered the rings powerless over yellow -- and when the Central Battery was destroyed in Green Lantern #50 (1993), the weakness was removed for the next generation.

In the years since the "Emerald Twilight" story removed the weakness to yellow, it has been redefined. The impurity, Geoff Johns explained in his universe-reshaping Green Lantern: Rebirth miniseries, was actually a cosmic fear parasite known as Parallax, and it was Parallax's imprisonment in the battery that undermined the rings' function. Parallax was to yellow what the Lanterns were to green, and ultimately there would be a rainbow of Lantern corps introduced, and an ever-broadening mythology that positively dwarfed the point in the '90s when Kyle Rayner was the final surviving Green Lantern and seemingly the only being drawing his powers from what came to be known as the "emotional spectrum."

There are a few reasons to believe the yellow impurity may return, even while it remains a relative longshot.

First and foremost, best-selling writer Grant Morrison is coming soon to relaunch Green Lantern, and while "Emerald Twilight" and Green Lantern: Rebirth both attempted to bring a more modern, "realistic" feel to the property, Morrison is not big on that.

Yes, for years, the yellow weakness has been mocked and derided, but such derision seems to hold little interest for Morrison, who famously proclaimed, “Kids understand that real crabs don’t sing like the ones in The Little Mermaid. But you give an adult fiction, and the adult starts asking really f---ing dumb questions like ‘How does Superman fly? How do those eyebeams work? Who pumps the Batmobile’s tires?’ It’s a f---ing made-up story, you idiot! Nobody pumps the tires!”

And, okay, so that is not exactly a compelling reason for them to restore the yellow weakness, outside of the fact that with Hal Jordan taking a front-and-center role in what looks to be a bit more of a traditional Green Lantern series from Morrison and artist Liam Sharp, a more "classic" approach to Hal would not be out of the question.

And, if DC or Morrison should want that approach, the current story provides a perfect opportunity to make it happen. 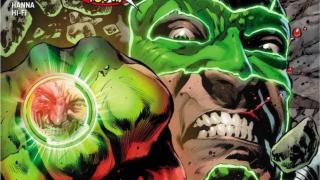 In "Evil's Might," the Green Lantern rings are being compromised by Hank Henshaw, the Cyborg Superman. Henshaw has the ability to essentially insert himself into any piece of technology and manipulate it to his own ends.

Now that he is inside the rings, it only stands to reason that he would try to corrupt the Power Battery itself, as suggested by an upcoming cover that features Henshaw lounging on dead bodies in front of the Battery.

"Part of my concept here was to say that these rings are all connected by a single power source," writer Dan Jurgens told ComicBook.com. "If you start to think of it like computers on the internet and the connectivity that is there, to me once you start to mess with one ring, you kind of start to mess with all of them."

That single power source is, of course, the battery -- and it is not only a power source but has been a prison before -- not only for Parallax, but for Sinestro and a few other heavy-hitting villains that the Guardians of the Universe could not otherwise contain or control.

Now that the Guardians are playing a bigger role in the Corps again, and Henshaw is inside their system, it would not be outside of the realm of possibility for the Guardians to attempt to imprison him inside the Central Battery.

And if they did? Well, between his ability to mess with technology of all kinds, and the fact that he has been a member of the yellow-powered Sinestro Corps intermittently since 2006's "Sinestro Corps War," he could easily attempt to continnue manipulating the Green Lantern rings from within by reinstituting the impurity.

Will they? Who knows -- but it's a fun theory, and if there was ever a time for DC to reinstate the wacky weakness, now seems to be the moment.

Green Lanterns #54 will be available in stores and online this Wednesday.

Will 'Green Lanterns' Restore the Characters' Weakness to Yellow?