Last week, Comicbook.com was lucky enough to be included in a handful of journalists who traveled to London, to visit the offices of Warner Bros. where director Patty Jenkins was hard at work with producers Chuck Roven, Geoff Johns, and so many others, editing together the final cut of what will be the theatrical cut of Wonder Woman, in theaters this June.

During that visit, we were lucky enough to be some of the first people to see the latest footage from Wonder Woman, and, based on what we saw, we have no other choice but to cast this early proclimation: Wonder Woman will indeed be the kick-off to a brand new era of DC Films projects.

The Wonder Woman footage we saw constituted a healthy mix of the drama, comedy, and (yes!) epic DC Comics action that Wonder Woman will offer audiences.

NEXT PAGE: What We Saw (Footage Reaction)

Scene #1 took place on a ship that was leaving the Amazons' mystical island home Themyscira. Aboard the ship we find WWI Allied Forces spy Steve Trevor (Chris Pine) and Diana/Wonder Woman (Gal Gadot), as they plan and discuss what will happen when they first reach London, and then the front lines of the war.

The purpose of the scene was to demonstrate the sort of chemistry that Gadot and Pine have as Wonder Woman and Steve Trevor (respectively), and it worked. The screenplay by Allan Heinberg and Geoff Johns - combined with Chris Pine's comedic charisma and some surprisingly good wit from Gadot - made the Diana/Steve relationship a pitch-perfect blend of bantering humor, romantic chemistry and a sense of mutual respect and compassion between the characters.

Without spoiling any of the crackling dialogue, let's just say the boat scene establishes that Wonder Woman is smart and independent - yet also hopelessly naive about the ways of man's world. Meanwhile, Steve is jaded by people, bewildered by the discovery of The Amazons and their origins (more on that HERE), yet also genuinely concerned with preserving Diana's childlike wonderment and optimism, without letting them get her into trouble.

...In fact, one could probably make a whole reel highlighting Chris Pine's facial expression reactions to Wonder Woman's nonchalant claims about Greek goods and mysticism. It's a great central character pairing, and Gadot and Pine will definitely be able to carry the movie.

After the scene establishing the sort of relationship we'll see between Steve Trevor and Wonder Woman, we got several smaller scenes that showed how both sides - first the villains of the film, then the good guys - are preparing for the endgame of the war.

The first moment we got focused in on the two main villains of Wonder Woman: Maru/Doctor Poison (Elena Anaya), and General Erich Ludendorff (Danny Huston). The scene showed Ludendorff arriving at a base, where his soldiers are run down and broken, as Germany nears its surrender. However, Ludendorff isn't tolerating the low moral, and answers the pleas for rest from an attending commander by shooting that commander down in front of the other soldiers, without breaking his stride.

When Ludendorff viists Maru's shop, the Doctor is frustrated by her failures to develop a new gas that would slaughter the Allied forces - she needs a book (read: MacGuffin) to complete a formula, but does not yet have it. Ludendorff whispers in her ear, reaffirming his confidence in her - not the book. She answers him with a new gas - one that will restore his "strength." Ludendorff inhales the gas from a small glass tube, and his face instantly lights up with effervescent splotches (like lightning in his skin), revealing the first visual clue that he is more than a mere man - he is Ares, the god of war that Queen Hippolyta has been hiding Diana from all this time - and whom her sword, The Godkiller, is meant to slay.

The next scene seemed to follow the preceding one, as Diana and Steve pull up in a boat to the harbor of London, which Diana instantly thinks is an ugly, industrial eye sore (Steve: "Yeah, it's not for everybody").

Steve and Diana are then making their way through the streets, but quickly find themselves pulled in two very different directions. Diana wants to immediately go to the frontlines, where the battle is the worst (where she thinks she'll find Ares); Steve must report to his commanders, with intel about the weapon that Ludendorff and Maru are working on. After another great round of banter between Steve and Diana, they compromise to hit Steve's objective first, then Diana's immediately afterward.

...There's only one problem. In here Amazon armor and big black fur coat, Diana is getting looks left and right from soldiers and society types alike, as if she is the only hooker out strolling in daylight hours. Steve tries to manage the situation without letting on about what's happening to Diana - who is too caught up in the oddity of women hand-in-hand with men, or the sight of infants (she's never seen a baby) to know how out of place she really is.

The scene ends with Steve steering Diana towards a shop, where she can better blend in, wearing the most bland outfit possible. 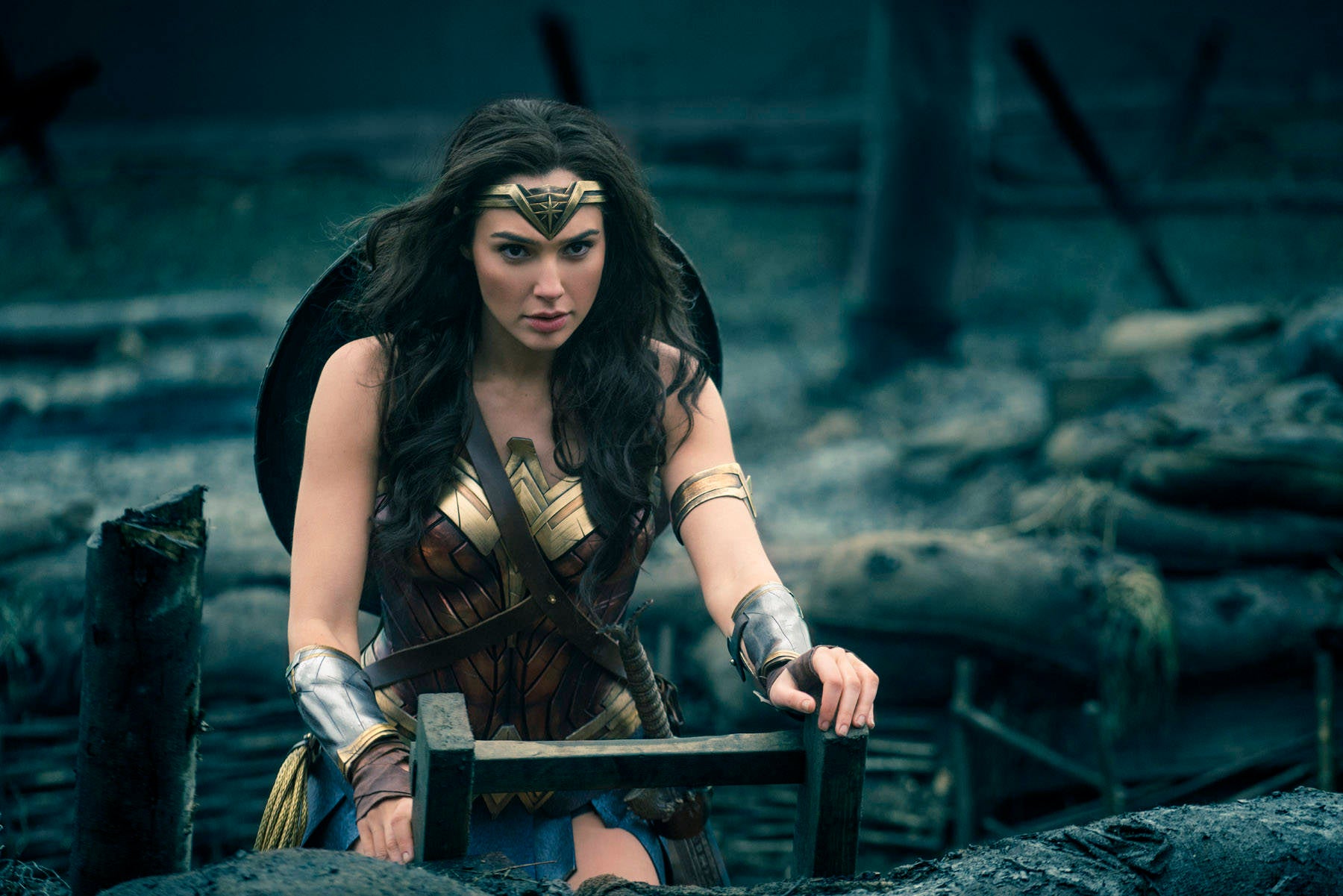 In what is probably the first real big heroic moment of the movie, Wonder Woman arrives at the frontlines with Steve Trevor and his team. That team includes shell-shocked sniper Charlie (Trainspotting's Ewen Bremmer); master of disguise, Sameer (G.I. Joe's Saïd Taghmaoui); and expert smuggler/hustler, The Chief (Eugene Brave Rock).

The scene on the front lines is bleak; a town of people is suffering under German occupation - women and children in peril - but the Allied forces have been pinned down for months by machine gun fire and mortars, in what is, as Steve Tevor says, "No Man's Land - that means no man can cross it!" That sets the scene for an epic moment where Diana, moved by her quintessential empathy and love for others, decides that even though no man can cross that ground, she will.

This takes us into the scene in the first trailers where Wonder Woman dons her costume and climbs a ladder onto the battlefield, facing down machine guns and learning of her own power as her bracelets block and deflect the bullets, and her shield draws all gun fire toward her. Witnessing the impossible, Steve Trevor and the other soldiers are dumbfounded - but when Diana charges the German line, they finally find their courage and charge in behind her.

The scene finishes with an epic battle that looks every bit like a real war movie - with the exception of Gal Gadot's Wonder Woman leaping through the air and smashing things down. The scene ended with Wonder Woman regrouping with Steve and the team, preparing to storm the walls of the town where German soldiers are holding innocents hostage.

Before the lights came up, we were sold on Wonder Woman; and we think millions of others will be too, when they see this particular scene for themselves.

Are you excited for Wonder Woman to hit theaters? It's currently ranked #8 on our Anticipation Rankings below, so be sure to vote and help it rise to the top!

Who Are Wonder Woman's Villains?

How Wonder Woman Is Different From Justice League

Batman May Appear in Wonder Woman