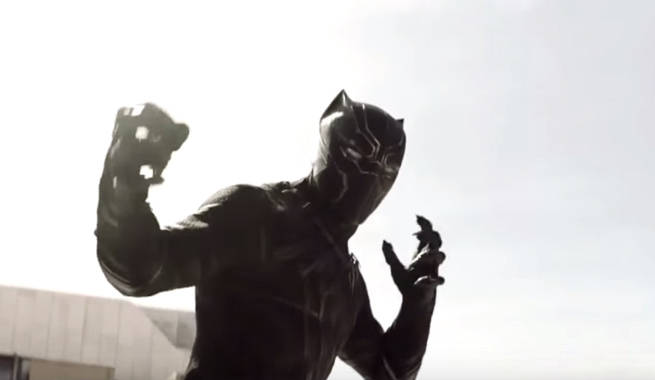 Now that T’Challa himself, played by Chadwick Boseman, has made his debut in Captain America: Civil War, it seems like the gears are beginning to turn on the Black Panther movie.

A casting call sheet connected to Marvel’s film has reportedly appeared on the Internet, found on moviecastingcall.org, revealing what may be the supporting cast and villains that will be appearing alongside Boseman’s Black Panther in his first solo outing.

If the casting call is legitimate, it both confirms that certainly previously seen characters will be appearing in the film, as well as several characters making their Marvel Cinematic Universe debut.

Panther was a fan favorite character in Captain America: Civil War, nearly stealing the show from the titular lead and his ideological opponent, Iron Man. In the film, T’Chaka, T’Challa’s father and king of the reclusive African nation of Wakanda, was killed in an attack on the United Nations orchestrated by Helmut Zemo in order to frame Bucky Barnes. His father’s death spurred T’Challa to reveal himself as the Black Panther, guardian of Wakanda, in order to hunt down his father’s killer.

Black Panther will star Chadwick Bosmena, with Ryan Coogler (Creed, Fruitvale Station) directing. Coogler also co-wrote the script with Joe Robert Cole. The film will be largely set in Africa, and Marvel is hoping to partially film on location will production begins in early 2017.

Check out when Black Panther and other movies are coming out in ComicBook.com's Movie Release Schedule.

The casting sheet seems to confirm that Andy Serkis will reprise his role as Ulysses Klaw from Avengers: Age of Ultron in Black Panther, which most fans assumed to be the case.

Klaw is one of Black Panther's recurring foes, and is the man who murdered T'Chaka in the comics. In the Marvel Comics Universe, Klaw is a physicist who has transformed into a being of solid sound. He weaponizes his sound using a sonic emitter on his right wrist. Klaw losing his hand in Avengers: Age of Ultron may be a hint in that direction.

Monica Lynne is an American singer and long time love interest for T'Challa. Accordingt to the casting sheet she saved T'Challa from drowning after a rough encounter with Killmonger (featured later in this article), but their meeting involved the racist group the Sons of the Serpent in the comics.

At one point, T'Challa and Monica were engaged, but the wedding never happened. She has frequently been used as a pawn in Killmonger's and other villains' plans to destroy the Black Panther.

Martin Freeman seems to be reprising his role as Everett Ross, first seen in Captain America: Civil War. Again, this comes as no real surprise, as Ross in the comics has primarily served as an escort to T’Challa while the king is diplomatic mission to the United States.

Ross was present as an ally to Black Panther during several of T’Challa’s battles, several of which involved other characters on the casting sheet.

N'Gassi is a elder in Wakanda. He is a close confidant of T'Challa and the ruling family, and acts as regent when T'Challa is away from the country. N'Gassi has been instrumental in coordinated the defense of Wakanda during attacks when the Black Panther is either missing or busy elsewhere.

Okoye and Malice (formerly called Nakia) were members of the Dora Milaje, elite bodyguards and wives-in-training to the king of Wakanda. The group had been disbanded, but T'Challa was forced to reinstate the tradition to quell political upheavel in Wakanda. The "wives in training" part of the deal was ceremonial, as T'Challa looked at the young girls more as his wards than his consorts.

Okoye accepted this fact, but Nakia did not, and fully desired a romantic relationship with T'Challa. Eventually Nakia left the Dora Milaje. She was found, tortured, and left for dead by Achebe, but Killmonger found her and arcane means to revive her, granting her superhuman strength and accuracy as the villain called Malice.

Chante Giovanni Brown was born in Wakanda as the princess of the Jabari tribe. Her people worshipped the White Gorilla. Her parents were murdered by the Black Panther cult. One of T'Challa's warriors posed as Chante's grandmother and brought her to Chicago, where she was raised ignorant of her heritage. Chante became an activast, but was later informed of her true lineage and ivited to join the Dora Milaje.

W'Kabi and Zuri are both Wakandan warriors and allies to T'Challa. W'Kabi was the head of security, and T'Challa's second-in-command. He was outfitted with a bionic arm capable of generating deadly blasts.

Zuri served T'Chaka before T'Challa, and is considered a Wakandan war hero of astounding size and strength. He's also a capable tracker, and a master of both armed and unarmed combat.

Reverend Achebe was a poor farmer who sold his soul to Mephisto to be reborn after he was murdered by government soldiers. The reborn Achebe became a kind of trickster demigod, sporting a devilish grin and speaking to his puppet, Daki, as if it were a living advisor. Achebe spreads discord and unrest seemingly for his simple amusement.

When he was boy, Killmonger's family in Wakanda was pressed into the service of Klaw. When Klaw was defeated, Killmonger's family was exiled and ended up in Harlem. Killmonger grew up resenting both Klaw and the Black Panther. Killinmonger returned to Wakanda and has ceaselessly attempted to overthrow T'Challa's government.

Man-Ape is another rival for T'Challa's throne. Beforing becoming the Man-Ape, M'Baku was considered one of the greatest warriors in Wakanda, second only to the Black Panther. M'Baku was a member of the Jabari Tribe. While Black Panther was away with the Avengers, M'Baku revived the outlawed White Gorilla tribe. He killed and consumed the flesh and blood of a rare Wakandan white gorilla, mystically gaining its strength. He then tried to take the throne. The Man-Ape believes that Wakanda should return to its hunter-gathering, strengh and nature based ways and abandon T'Challa's focus on technology.

The White Tiger is T'Challa's adopted older brother named Hunter. Hunter was once in line to rule Wakanda, but realized he'd lost that opportunity when T'Challa was born. He felt cheated, and this bitterness drove him to become the best Wakandan he could be. His zeal got T'Chaka to appoint him as the head of the Halut Zeraze, Wakanda's elite espionage and state police force, where he took on the persona of the White Wolf. However, his brutal methods, including torture, got him exiled by T'Challa. White Wolf went on to become a mercenary leader. While still resentful of T'Challa, he considers himself a Wakandan patriot in exile, and does what he can to aid the nation when the opportunity presents itself.

Why WandaVision Will Be More Important Than Avengers: Endgame