With Marvel Comics' epic 2016 event Civil War II now officially over, some fans may be wondering where to turn next to continue following the big stories of the Marvel Universe.

As a story, Civil War II covered a lot of ground and had multiple milestone moments that serve as the starting points for new eras in certain character's careers.

In other words, there's no one series to read to see "what happens next" following Civil War II. Instead, we've gathered five titles that follow major events that transpired during Civil War II. Keep reading to see what our picks are.

If there was a main character in Civil War II it was Captain Marvel. Captain Marvel led the charge for using Ulysses' Inhuman gifts to dish out predictive justice, and she landed the final blow that ended the war.

Now she has to live with the consequences. Was winning the fight worth everything it cost her, especially now that Ulysses is gone?

Captain Marvel doesn't have much time to consider the consequences. She's just been given new authority by the United State president. It's time to put it to use.

The Greatest. That's what they call her. Carol Danvers has been to the depths of outer space and back, but that still hasn't prepared her for her newfound status of biggest super hero ever.
Yaas, Queen! Danvers may not like the crown she's wearing, but boy does it look good on her. Just watch out for the thorns it comes with-forces trying to take down everything Carol has built.
Carol Danvers makes her triumphant return as the Mighty Captain Marvel! Written by celebrity writer Margaret Stohl (Beautiful Creatures, Black Widow: Forever Red) and drawn by the artfully talented Ramon Rosanas (Ant-Man), this bold new take on Earth's mightiest and favorite hero!
Rated T+ 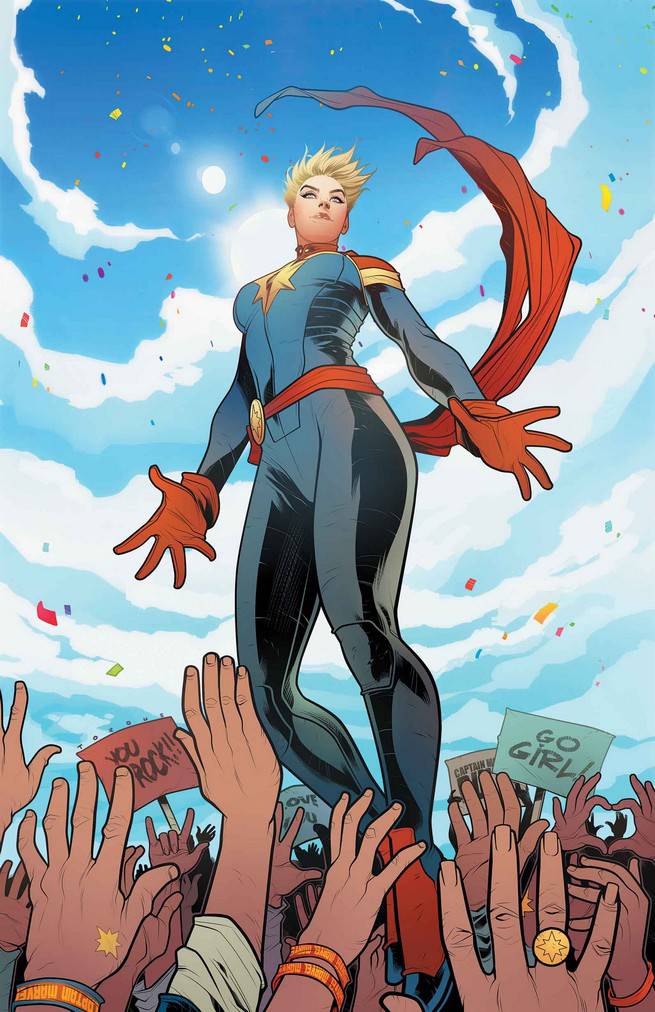 As of the end of Civil War II, Tony Stark is no longer in any shape to act as Iron Man, but that doesn't mean that someone isn't carrying on the Iron Man legacy.

Riri Williams is a brilliant 15-year-old girl who built her own suit of Iron Man armor. She's new to the game, but she's bold enough to come to Tony's side in Civil War II.

Now Tony is gone, but he's left behind a suit AI with his knowledge and personality to help guide Riri, who will operate under the superhero name Ironheart, into her future.

From the violent streets of Chicago, a new armored hero rises! Clad in her very own Iron Man armor, Riri Williams is ready to show the Marvel Universe what she can do as the self-made hero of tomorrow. But is she ready for all the problems that come with stepping into Iron Man's jet boots? Where's a genius billionaire playboy philanthropist when you need one?

One of the major events in Civil War II was when Hawkeye killed Bruce Banner. The move has turned Hawkeye into something of a pariah with a large portion of the superhero community, and something of a folk hero among average citizens.

So what does Clint Barton do for his next act? He travels across America helping people with an A-Team style group fo fellow Avengers in Occupy Avengers.

"[Occupy Avengers] does have a reflection on the state of the world today," editor Tom Brevoort said in an interview with ComicBook.com. "While it's not an endorsement of any particular political or sociopolitical mindset, it is reflective. It is going to be dealing with probably more ground-level, real-world concerns than the average Avengers book does."

Occupy Avengers is written by David Walker with art by Carlos Pacheco. The first two issues are on sale now.

Super heroes - they're a privileged class. Doing what they want, when they want and suffering no consequences. They have no regard for the ordinary people who are left behind to suffer in their wake. Who will stand up for the little guy? There is a man. If you can find him, and if he believes in your story, he and his friends will put things right. Some call them outlaws, rebels, Robin Hoods. To others, they are heroes. No powers to speak of - just skills, smarts and a burning drive to do the right thing. His name is Hawkeye. Occupy Avengers: It's time to "Take Back Justice"!

The other side of the Hulk's death is explored in a new series following Bruce's cousin, Jennifer Walters, aka She-Hulk, written by Mariko Tamaki with art by Nico Leon.

She-Hulk was badly beaten by Thanos during one of the early battles of Civil War II, leaving her hospitalized for the remainder. When she learned of Bruce Banner's death, a new, angrier, gray form of her Hulk persona emerged.

This first issue of Hulk, on-sale now, showed Jennifer Walters dealing with returning to her regular life. Her transformation into She-Hulk, once a moment of empowerment, is now a painful and difficult to control manifestation of the trauma she underwent in Civil War II.

JENNIFER WALTERS has survived the Civil War...barely...and having risen from the rubble, she re-enters the world a different kind of hero. Fueled by a quiet rage, she is determined to move forward, to go on with her life, but the pain of the past and all she's lost is always there - an undercurrent, a pulse, waiting to quicken and trigger Jen's transformation into the one thing she doesn't have control over...

The big finale to Civil War II was set up by one particular vision had by Ulysses. That vision showed Steve Rogers, Captain Amerca, dead at the hand of Miles Morales, Spider-Man, on the steps of the Capitol Building. This vision compelled Miles to head to the Capitol Building and prove Ulysses' vision wrong, which is where the final fight between Captain Marvel and Iron Man took place. The vision repeated when Ulysses ascended to join the rest of the Elders of the Universe.

This is is a vision that may still come to pass. What Ulysses and the other heroes don't know is that Captain Americahas had his life rewritten by a sentient cosmic cube so that he is, and always has been, and agent of Hydra.

The Red Skull marches across Europe, and S.H.I.E.L.D. comes apart at the seams! Steve opens a door - and the secret behind it will shake the Marvel Universe to its core...