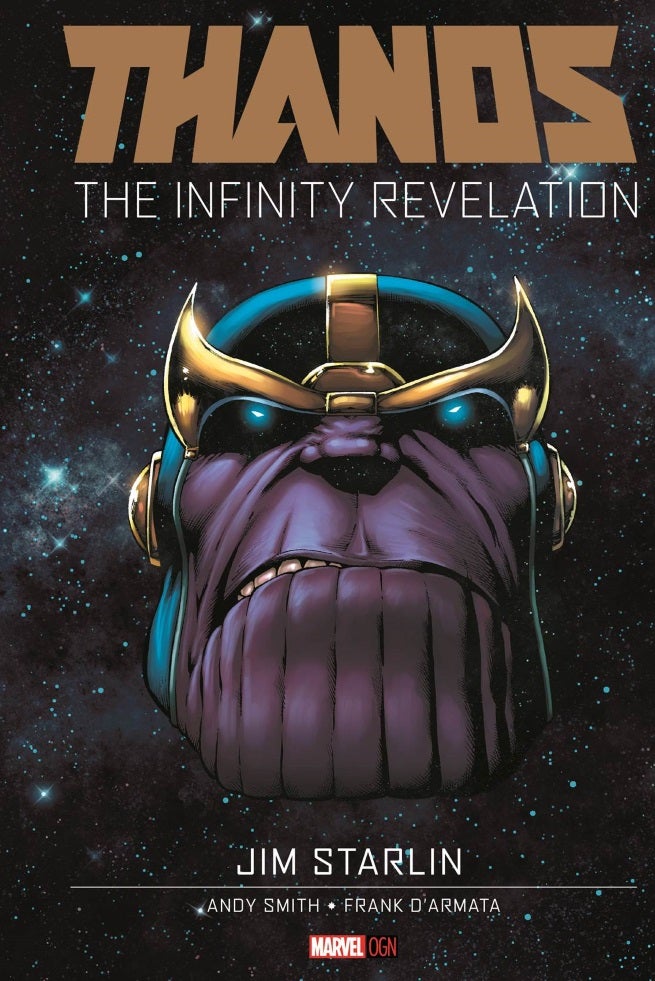 The most striking thing about "Thanos: The Infinity Revelation" is the massive scale on which it occurs. Distance is measured in light years, characters are gods, and planets are like billiard balls in some cosmic game. Nothing about this comic is small.

That sense of enormity will not be surprising for readers familiar with Jim Starlin's work with the cosmic side of the Marvel universe. Dating back to his comic Adam Warlock starting in 1972, Starlin has been fascinated by the immensity of space and the ideas represented by the heroes and villains occupying it. "The Infinity Revelation" sits comfortably amongst the canon of his previous works like "The Infinity Gauntlet" and "The Death of Captain Marvel".

In all of these comics Starlin has sought to create a modern mythology, comparable to Jack Kirby's work on The Fourth World. Although inextricably linked to the superhero genre, this comic ignores most of the genre's tropes. Its characters are neither good nor bad. While Thanos may be a villain in a typical Marvel comic and Adam Warlock a hero, here they stand above such titles and represent their own grand ideas and goals. When Thanos acts, often to the chagrin of mortals, it is presented as the actions of a universal force, not the crimes of a nefarious foe. He has more in common with characters like Zeus or Poseidon of Greek mythology, than the Red Skull or Magneto of Marvel's modern myths.

Starlin, with Andy Smith inking and Frank D'Armata coloring, provides this perspective through page layouts and character compositions. Two-page spreads and large splash panels are not used to provide extra room for dialogue, but to add grandeur to the arrivals and gestures of the actors in this interstellar play. Body language is used to make each action feel epic. Panels are composed for maximum impact. Subtlety is not a concern in delivering the content of this comic. There is a comparison to be made with the illustrations within early printings of Shakespeare. Images of King Lear shaking his fists mightily are just as extravagant as those of Thanos striking down those who would hinder him.

The scale rendered in later psychedelic sequences also lends an air of gravitas to the comic. Reminiscent of Starlin's work on Adam Warlock, strange happenings fill many pages with floating eyeballs and rainbows warping the background. Reality is made out to be a suggestion and the resulting effects are worth parsing before the story continues. A pair of two-page spreads late in the comic are particularly worth exploring. Starlin, Smith, and D'Armata do excellent work in exploring the psyches of two characters by presenting their respective psyches as otherworldly collages.

Starlin's dialogue also provides a grand sense of scale. There is no narration in "The Infinity Revelation". All exposition must come from the characters. There is plenty of exposition though and it is delivered bluntly in stage-like monologues. This style of dialogue may be off-putting to some readers who are more familiarized with the natural speech patterns in modern comics, but it is purposeful. Starlin is not presenting the characters in "The Infinity Revelation" as natural speakers, but as gods. At one point Thanos recalls that although he derives sustenance from absorbing energy, he still desires a steak or distilled beverage on occasion. The need for enunciated speech lies along these same lines. Beings like The Living Tribunal do not seek to speak to us, so their speech is perceived as distant and alien.

The lettering helps to create this effect as well. Each cosmic being is presented with their own unique manner of speech. The Living Tribunal's words appear without speech bubbles as bold letter emblazoned across the page. Thanos' bubbles waver slightly, providing a sense of madness for the Mad Titan. These effects work well in not only creating distance, but also in characterizing the speakers.

The combined effect of Starlin's approach to storytelling in both art and words is that it reads like a creation myth, closer in language to Homer's epics than modern novels. It creates a purposeful distance, allowing readers to observe, even if they cannot empathize with the characters presented.

Fans of Starlin's cosmic work and readers familiar with earlier stories using these same characters and techniques will have no problem parsing the text. However, as an introduction to Thanos or the cosmic Marvel universe, this style could be alienating to new readers. It is clearly linked to the stories of the 1960's and 70's in both its prose and presentation. That connection brings Starlin's wild imagination to life, but also creates a sense of distance between the work and the reader. It is a fitting barrier, one that works with Starlin's goals of myth making, yet still a barrier.

Although Starlin's goal is to tell a story of grand ideas and scope, it's difficult to not read into the work and see metaphors for smaller concerns. Dating back to his work on Adam Warlock, Starlin has used metaphors (many of them not very subtle) to discuss the comics industry and poke fun at how it functions. As "The Infinity Revelation" draws to a close, it's difficult to not draw some connections between the incredible events occurring on the page and recent events at large publishers. There are endlessly repeating cycles and reconstructions of realities that are comparable to reboots and the endless cycle of superhero drama. For as much as Starlin seeks to tell creation myths and construct titans that tower over the heroes of the Marvel universe, he also writes what he knows. And what Jim Starlin knows is comics.

"The Infinity Revelation" regales readers with characters, artifacts, and landscapes that can only be imagined. Starlin's pencils are as sharp as ever, and fully capable of transforming his imagination into reality. This is a comic packed with big thoughts and ideas, unconcerned with relatable day-to-day dramas. Starlin's ambition in making a comic about gods that tower over superheroes is realized as both modern myth and metaphor. It is ultimately a story of marvels, and what better place to find such a tale than the House of Ideas?