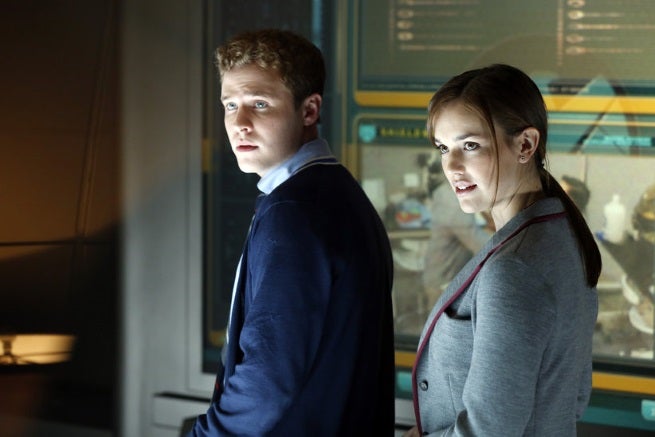 None of the main characters from Agents of S.H.I.E.L.D. got through the show's first season without some emotional scars that changed them from who they were at the show's start, perhaps none moreso thatn Leo Fitz and Jemma Simmons, collectively known as Fitz-Simmons.

The duo was betrayed by the person they trusted most in Agent Grant Ward, and, as a result, Fitz was force to nearly sacrifice his life in order to save Simmons'. The actors who play these characters spoke to ComicBook.com about how the world has changed around them.

"Everything's changed because it's now illegal to be a S.H.I.E.L.D. agent," says Elizabeth Henstridge, who plays Simmons. "S.H.I.E.L.D. are now being hunted, as well as trying to hunt things that are dangerous. For Simmons, she's changed a lot from what happened at the end of last season, and her relationship with Fitz is obviously strained and fractured, though to the guilt she feels for taking the oxygen. So their relationship is something that we're going to explore more, with undercurrents of guilt and regret and all of that."

"It's hard to say exactly what's going to happen after what happened at the end of Season 1," says Iain De Caestecker, "especially with, for instance, what happened with Ward. I think everybody's just coming to terms with things like that. It was such a big ending, with so many emotions, that everyone's kind of coming to terms with those different things, and as a team."

Henstridge and De Caestecker also shared their hopes for Fitz-Simmons in Season 2.

"That's kind of the main thing," says De Caestecker. "Just staying alive from episode to episode is kind of the biggest thing right now, because we're actually turning pages just being like, 'uhhh…"

"I think they're all in a position now where everything's been burned to the ground that, like a phoenix rising from the fire, we can all just be stronger," continued Henstridge. "Because we started season one both quite naïve and kind of skittish, and the stakes weren't as high, whereas now we've been through so much. I think, individually, they're probably going to grow more as characters, and maybe less as a unit...There's definitely going to be new alliances within the team."

"With Season 1, there was a lot of superheroes, and characters form the comics and the Marvel world introduced for the first time," says De Caestecjer, "but, as Clark said the other day, in essence the show is till about these S.H.I.E.L.D. agents who are just ordinary people, up against these superhero powers and stuff, and that's kind of the main focus of the story."

Deadpool 3 Writers Promise to Make Fun of Many Marvel Movies