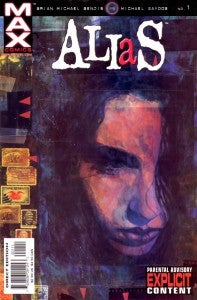 It's no surprise that Marvel's hoped-for television iteration of The Punisher failed to get any traction; the writing for that has been on the wall for a while and articles reporting on yesterday's development on the Hulk series that's in development. AKA Jessica Jones, though, was a sexy, spy-themed story that revolved around a female superhero and that seemed like it could be a good thing for all involved. Apparently, though, that wasn't quite enough. The series, based on Brian Michael Bendis' Alias, isn't quite off ABC's radar but it's at least on the back burner. Essentially, while yesterday we learned that the long-quiet Hulk series was still in development, we're hearing the opposite about AKA Jessica Jones today. ABC Entertainment President Paul Lee offered little in the way of answers, telling reporters on a conference call earlier today only that "Other projects are more toward the front of the queue now," according to MTV's Splash Page blog. On which Marvel properties might be in that queue, Lee only teased, "We've got some in development, but none that I can talk about at this point."

AKA Jessica Jones and Punisher TV Shows No Longer Being Developed