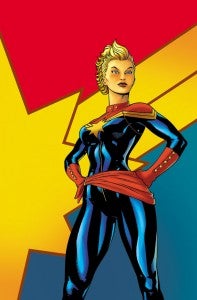 is reporting that British actors Emily Blunt and Ruth Wilson are being considered for the role of Ms. Marvel in the forthcoming sequel to  Marvel's The Avengers. Blunt, who starred in The Muppets and Looper, has a history with the Marvel Cinematic Universe, having been the first choice for Black Widow. She was also reportedly in the running to play Peggy Carter in Captain America: The First Avenger. The Black Widow role, for which she was all set to roll in Iron Man 2, reportedly didn't happen because she had a scheduling conflict with a film for which she was contracted, although it does sound like her reading of the Captain America: The First Avenger script may not have given her a great impression of Peggy Carter. "Usually the female parts in a superhero film feel thankless," Blunt told Vulture in a March interview. "She's the pill girlfriend while the guys are whizzing around saving the world. I didn't do the other ones because the part wasn't very good or the timing wasn't right, but I'm open to any kind of genre if the part is great and fun and different and a challenge in some way." Luther and The Lone Ranger star Wilson is also said to be in the running. Having just starred in Anna Karenina and with Saving Mr. Banks coming up on the horizon, her stock is rising quickly and a Marvel role could solidify her as a bona fide star. Carol Danvers, the longtime Ms. Marvel, was recently "promoted" to Captain Marvel in the comic books, although it's hard to imagine Joss Whedon and Kevin Feige, self-professed Jim Starlin fans, would make that jump right away, as it would leave Mar-Vell, the Kree Soldier most associated with the name and one of Starlin's most popular creations, somewhat in the cold as far as movie options.

Here's Where to Get Hasbro Pulse Con 2022 Exclusives: Day 2