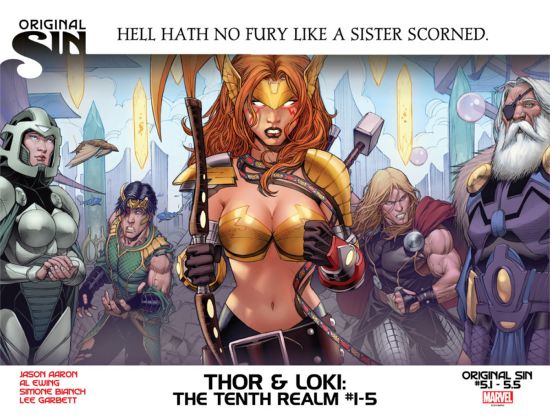 At the Marvel Original Sins panel at C2E2 earlier today, Marvel revealed the origin story for Angela.  Marvel editor Nick Lowe surprised the crowd by announcing that Odin has another child. Angela, who was originally created by Neil Gaiman and Todd McFarlane, is the long lost, secret daughter of Odin and the sister of Thor and Loki. Angela's story will be told in its own mini-series, which will be called Original Sin: Thor and Loki: The Tenth Realm. Marvel also released a new image of Angela with the teaser text, "Hell hath no fury like a sister scorned." Original Sin: Thor and Loki: The Tenth Realm will run for five issues, and the story is written by Jason Aaron and Al Ewing with art by Simone Bianchi and Lee Garbett.

C2E2: Angela Revealed To Be The Sister Of Thor And Loki