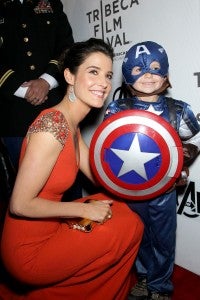 Cobie Smulders, who played S.H.I.E.L.D. Agent Maria Hill in Marvel's The Avengers and is expected by many fans to join the cast of Marvel's S.H.I.E.L.D. when it comes to TV soon, will reportedly return to the role in Captain America: The Winter Soldier. It could turn out to be nothing, as Comic Book Movie is basing it on an offhand cast summary in Variety's earlier casting announcement that Frank Grillo has joined the film, but the odds are with them. S.H.I.E.L.D. logically would play a substantial role in The Winter Soldier, which Marvel are billing as a political thriller that just happens to star dudes in tights. The comic book story revolved around the return of Bucky Barnes, Captain America's long-believed-dead sidekick, who was in fact rescued and resuscitated by the Soviet Army in the '80s in much the same way Captain Americawas in the '60s. He was brainwashed into being a Russian sleeper agent, so even money is on Scarlett Johansson's Black Widow appearing in the film as well. Not yet cast is Sharon Carter, S.H.I.E.L.D.'s Agent 13, who was Captain America's love interest and S.H.I.E.L.D. handler during the Winter Soldier storyline. Hill was not prominently featured, but since Carter will be introduced for the film, it's entirely possible that some of her material will be kicked to Smulders's character, especially in the film's first act. In late 2011, Smulders revealed during an interview with the How I Met Your Mother podcast that she had signed on to do eight Marvel Studios films; so far, she's not appearing (or at least not confirmed) in Iron Man 3 or Thor: The Dark World, meaning that Captain America: The Winter Soldier will be her second.