While Civil War II may now be in the past, it spent much of its final issue pointing towards the future, or several potential futures, of the Marvel Universe.

Several guest artists drew pages in Civil War II #8 that represented visions of possible futures that the Inhuman Ulysses shared with the other heroes who were in the area as he was evolving into a cosmic being.

So what do these vision mean? Some of them reference past Marvel Comics stories, others to events in the immediate future of the Marvel Universe, and others to potential futures that may or may not come to pass.

Let's break down everything that Ulysses revealed in his final vision.

This vision at first appears to be a look at the future of "Old Man Logan." The Wolverine from that story was shuffled into the Marvel Earth-616 Universe by the events of Secret Wars.

On closer inspection, it seems that this is actually the future of the Old Man Logan currently running with the 616 X-Men, which means he had to watch his new timeline devolve into the same dystopian state as his first timeline.

Logan tells Ulysses that the Inhuman left Earth, something that we know will happen, at least in part, in the upcoming Royals series launching as part of ResurrXion.

He also says it was Tony Stark who caused the world to become this way by pushing "her" too far. Most readers would assume "her" is referring to Captain Marvel, but it is unclear, especially considering how Civil War II #8 ended.

It seems this future is either the result of Civil War II ending differently in this timeline, which seems likely since Ulysses shows several other futures which have been averted by the events of previous stories or that Logan's words are foreshadowing events yet to come.

The first part of Ulysses' vision in Civil War II #8 showed several giant, kaiju-like monsters charging at each other in a huge battle.

This is a reference to Marvel's first big event of 2017, titled Monsters Unleashed.

Monsters Unleashed sees the Earth being invaded by several giant monsters, mostly classic Marvel monsters created by Jack Kirby and other classic Marvel creators. This includes formerly monstrous heroes like Groot and Devil Dinosaur, who will turn on their former allies.

The series has a high potential for mass destruction and requires the Champions, Avengers, X-Men, and others to stem the tide.

What, who, or where the X-Men are attacking isn't entirely clear from the image itself, but anyone who read Inhumans vs. X-Men #1 is likely to recognize this image as being nearly the same exact scene that ended that issue, just seen from a different angle (there's a slight inconsistency in that Magneto is seen here when he should be busy tearing the Inhuman Royal Vessel apart, but precognition isn't an exact science).

The X-Men's attack on New Attilan as seen here is likely to open Inhumans vs. X-Men #2 when it is released in January.

This vision is actually a retread of the vision that set the climax of Civil War II #8 in motion. Whether it is just another averted future or still one that could come to pass remains unclear.

The vision shows Spider-Man (Miles Morales) standing over the dead body of Captain America (Steve Rogers) with the assumption being that Spider-Man is responsible for Cap's death. This image also shows Cap glaring down from above over the badly damaged Capitol Building.

Spider-Man is wracked with guilt over this vision, but something that readers know that the heroes are unaware of is that Captain America has had his history rewritten by Kobik, the Cosmic Cube so that he is a loyal agent of Hydra.

One way of interpreting this vision is to predict that Captain America's endgame involve a Hydra assault on the Capitol and that Spider-Man kills Captain America while trying to stop the plot.

This is Earth-691, the future timeline of the hero Killraven.

Earth-691 is a timeline where the Martian's from H.G. Wells classic science fiction story The War of the Worlds returned to Earth to give the invasion a second try and found greater success.

The Martians establish a totalitarian control over the Earth, forcing men to fight in the gladiatorial arena while women are used for breeding infants and as food. Killraven is an escaped gladiator who leads a small band attempting to resist the Martians.

Days of Future Past

This is another reference to a classic Marvel tale. The vision shows a Sentinel leering over his defeated mutant foes.

This is a reference to "Days of Future Past," one of the most beloved and well-known X-Men stories of all time.

The story shows the alternate future timeline of Earth-811, where the assassination of Senator Robert Kelly by the Brotherhood of Evil Mutants led to the passage of the Mutant Registration Act and the birth of a Sentinel patrolled police state.

The "Days of Future Past" future was averted when Rachel Summers sent Kate Pryde's consciousness back in time to possess the body of her younger self, Kitty Pryde." By doing so, she was able to tip off the X-Men to the Brotherhood's plot, giving them the time they needed to save Senator Kelly's life.

With this image, Civil War II writer is referencing a previous Marvel Comics event that he wrote and a dystopian future of his own creation, Age of Ultron.

Age of Ultron took place in the divergent timeline of Earth-61112. In this timeline, Ultron returned to Earth and launched a quick and sudden strike that knocked out human civilization.

A small band of Avengers is all that remains of the resistance, but it seems unlikely that they'd ever be able to overthrow Ultron. A plan is hatched to send Wolverine back in time to murder Hank Pym before he can create Ultron, but this results in several more divergent timelines being created.

We've already discussed Ulysses' final vision in a previous article, but we'll touch on it here as well.

This vision seems to be hinting at a possible huge moment in Jason Aaron's Thor run that would bring several elements of his saga so far together.

The image shows Odinson, the original Thor, with Mjolnir in hand. He's fighting Loki, who seems to have returned to his adult, villainous self, complete with massively horned helmet.

Loki also seems to be wielding All-Black the Necrosword, the powerful weapon used by Gorr the God Butcher to murder deities across the universe. 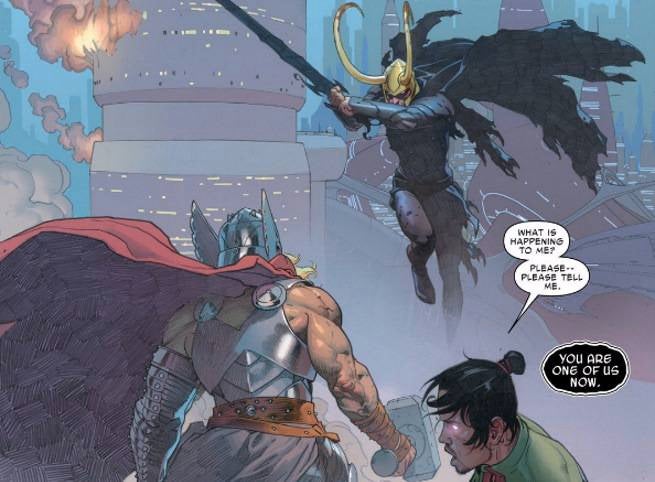