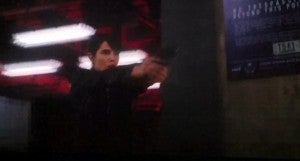 Cobie Smulders, the Canadian model-turned-actress who plays Robin "Sparkles" Scherbatsky on How I Met Your Mother, has revealed that she is not only signed to star as S.H.I.E.L.D. Agent Maria Hill in The Avengers, but seven additional Marvel Comics Movies, according to MTV's Splash Page. The site reports that Smulders, in a conversation with the How I Met Your Mother podcast last week to discuss the beginning of the show's new season, told the audience that she was signed on for seven films beyond The Avengers. MTV Reports her exact comments as, "This one, plus seven more, I think. This doesn't mean I'm doing seven films - just means if they like me, then they'll have me on more." Bleeding Cool recently reported that Smulders's role in the film had been reported by IMDb as "Maria Hill/Anelle," which would constitute the first official revelation that the villains of the Avengers film were Skrulls, as has been long suspected. While her IMDb page no longer shows that information, recently-leaked footage from a scrapped Avengers video game seems to confirm it. Eurogamer, to whom the footage was leaked, has taken down the original video due to a copyright complaint by Marvel.