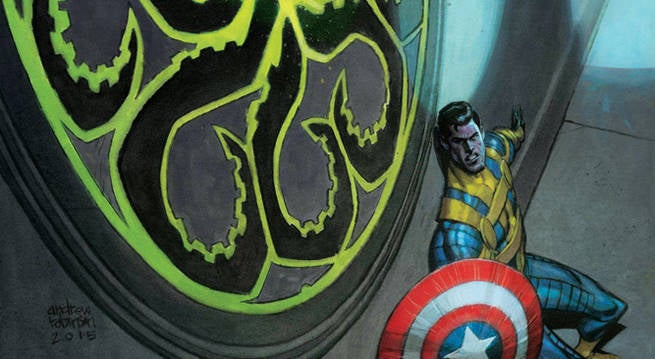 The famed writer, who penned Marvel's last big event, AXIS, is creating another inverted world with "Hail Hydra," a Secret Wars realm where S.H.I.E.L.D.'s evil counterpart, HYDRA, are the new standards in US Patriotism. In this world, HYDRA has dominated America for centuries, creating a Marvel Universe where its heroes and villains were born and raised on the organization's doctrines.

It makes for a bad place for Ian Rogers, Captain America's son, to suddenly find himself in. Nomad will soon be a fish out of water as he tries to survive in a world where the bad guys won so long ago, they're now the heroes.

In an exclusive interview with ComicBook.com, Remender chatted with us about this strange new world's rules, how they'll affect Nomad, and why Hydra-Venom is someone you really don't want to meet.

When it came time to get involved in Secret Wars, what made you land on the story of Hail Hydra? Since it stars Ian as Nomad, is this an extension of your Captain America run or a bit of a divergent path just focusing on Ian?

It really was an opportunity just to put a visual on what would happen if Hydra were to win. We've always seen Hydra's attempts at world domination foiled, so this story gives us an opportunity to dig into a world where Hydra was not only never stopped but had insinuated itself into the American system and took over the country hundreds of years ago.In this world, we'll see a New York City where Hyrda was like the Freemasons of history. Hyrda is now the American Dream.

This is a world where Hydra has ingrained its ideology into the fabric of the country, giving us all of the things we're fighting against in the Captain America series.

With Hydra, it's always like, "Oh, but they're not really going to take over the world. They're not really going to win this battle." So, this was an opportunity to show what the world would be like if they had won, and what life would be like for Ian and the other characters in the All-New Captain America series. In this world where they have been born, bred and raised Hydra.

With that in mind, I can only imagine you're having a ton of fun re-imagining some heroes and villains to fit the story. Can you give us an idea on who we might see?

What's cool about Ian is that he drifted from one dimension to the next in the main Captain America series, and now he's drifting into this dimension. It kind of gives meaning to the name "Nomad," because he really is drifting from one place to another. That's what made him the right choice for the story.

Does the top brass at Hydra look a little different in this story or will we see some familiar faces?

It's a lot of the characters that you're familiar with. There's a new character that I'm introducing, but this is a world where if somebody like Tony Stark had invented the Iron Man armor, somebody like Baron Von Strucker would probably have taken it. Or Tony might be a Hydra loyalist who built it for Hydra in the first place. So, you have to look at all these various pieces and  characters that would've been born into this world, and how being bred into Hydra would affect them and change things. That leads to some very interesting threats to face, and a conclusion that I'm fairly certain nobody will predict.

Do you have a favorite Hydra member that you've been itching to write, and now finally have the chance to bring to life?

Yeah, but it's more about taking some of the other characters and their histories and dipping them in the Hydra pool. The one that I'm most excited about right now is Eddie Brock as Hydra Venom. He's all white with the green Hydra on his chest. The symbiote took to the Hydra symbolism the same way that it picked up on the spider symbolism when it bonded with Peter. So now, you've got Eddie Brock stomping around with the Hydra symbiote and there's a lot of fun stuff to do with that. I don't want to give too much of it away, but obviously there's a fun version of the Hydra/Avengers that I'll play with.

The first issue is very, very much  a look at the world. I'm saving some of my big guns for later issues, but issue #1 is also something that was structured in a way to be more than an introductory piece to the story. It's also an introduction to Ian Rogers, who he is. We've set him up with a nemesis that will bounce off of him in a way that kind of helps new readers understand who Steve Rogers' son is, and to help ongoing Captain America readers get a real visual on Ian Rogers and see some other sides of him.

Does it feel good to be able to  jump back into a story with your old friends, Roland Boschi, Chris Chuckry & Andrew Robinson?

Sure. One of the reasons that I agreed to do this book was that we're putting the team back together from The Winter Soldier: The Bitter March.

That book is one of my proudest works at Marvel, and I think that has a lot to do with Andrew Robinson and Roland Boschi and Chris Chuckry. Sometimes a team comes together, and everything just kind of chugs along. Winter Soldier: Bitter March was one of those things. It was a genre and a tone that I've desperately wanted to work in for a long time. It was an itch I wanted to scratch, and when it was finished, it was one of the few things I've ever written that I re-read mostly because I was looking at the beautiful Roland Boschi and Chris Chuckry art.

The excitement for me was knowing that we'd be able to get that team back together. This story develops Ian quite a bit. It shows what the threat of Hydra is and what they're fighting over in All-New Captain America. Hopefully, we can gather the same sort of magic that we got on The Bitter March and recapture that here.

S.H.I.E.L.D. was never formed and Hydra has been pretty good about crushing any resistance. It's a very fascist state and it's been a fascist state for hundreds of years now. There have been rebellions.

But there have been characters whose internal integrity would not allow them to sit back for this. There will be characters that have tried to rise up, but ultimately failed against Hydra. It is a success story for Hydra and we get to see what the ramifications of that are.

Looking at the bigger picture, what does an event like Secret Wars get you excited about?

I'm working on the big post-Secret Wars project right now, and it allows me to give readers a very clear and true starting point with a beloved franchise. It enables me to pick and choose what I think are the most integral and exciting aspects of that property. Coming out of the other end of Secret Wars, I'll have the opportunity to do things in a much cleaner fashion.

So what do you think ComicBook.com readers? Are you excited for this Hyrda focused tale during Secret Wars? Let us know below!