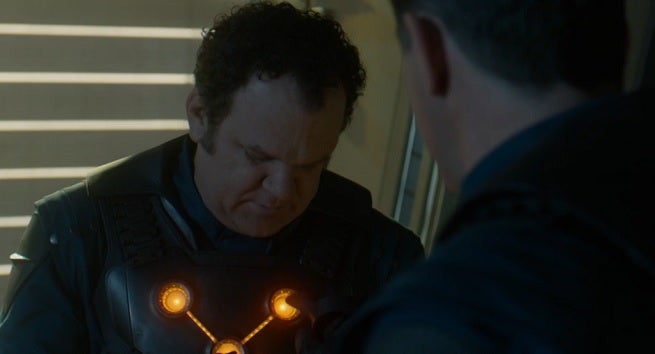 A newly-released deleted scene from James Gunn's Guardians of the Galaxy shows the decision-making process that led to the Guardians to be held (ever so briefly) at the Kyln.

Ironically, it's not fear of an escape attempt but of the brutality of the place that gives the Nova Corps pause -- but there's no place else to put them.

"The Kyln will have to do," the decision goes.

There's also a bit of physical comedy in there that seems like it may be making the best out of a bad situation in terms of props; it almost feels like the scene in the Twin Peaks pilot when Cooper and the coroner miscommunicate and have to clarify on camera -- something that David Lynch has said happened on the day and was kept in because it felt right.

You can check out the full scene below.

Guardians of the Galaxy will be on Blu-ray and DVD in December, and available streaming from a variety of digital services on Tuesday.

Guardians Of The Galaxy Funny Deleted Scene: The Kyln Will Have To Do