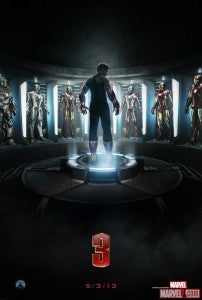 With the trailer hitting tomorrow, and the first footage and a number of promotional photos hitting the web yesterday and today, Marvel Studios has finally released the first official trailer for May's Iron Man 3, the first Marvel film to be released following The Avengers. Featuring Tony Stark's new armor being assembled on a platform surrounded by the previous armors we've seen in the first to Iron Man films and The Avengers, the poster is also a bit darker and more ominous than we've seen from the first two movies--something that echoes the tone of the teaser footage we've seen so far.