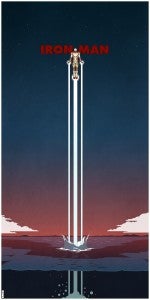 Like Marvel's The Avengers and a number of other recent blockbusters, Iron Man 3 will be released a week earlier in the U.K. and possibly other European markets than it is domestically. Reports are coming in from European fans on Twitter that a print of the trailer released in theaters this week retains the Marvel UK release date of April 26 that was teased when the trailer was released on the Internet earlier this week. The Shane Black-directed sequel is set to be released at the beginning of May in the United States. As hinted above, it's not particularly a surprising move. Fans had noticed the date change on October 23 when the trailer was released--and back in October, when a release date was announced for Ant-Man and 3D was confirmed for both Thor: The Dark World and Iron Man 3, Bleeding Cool speculated that they (the site is hosted in the United Kingdom) would likely get the film early, since they had gotten The Avengers before the U.S. did. That early release in other markets did result in bootleg copies of the film being widely available on the Internet before the film opened in the United States--but if that affected enthusiasm or box office take, it's hard to tell. Marvel's The Avengers had the biggest-ever opening weekend by a long stretch, and its Rotten Tomatoes score, which aggregates both professional and fan reviews for films, has been up over 90% ever since the very first screenings. Iron Man 3 stars Robert Downey, Jr., Gwyneth Paltrow, Don Cheadle and Ben Kingsley. It will be in U.S. theaters May 3, 2013.

Iron Man 3 To Be Released Early in the U.K.