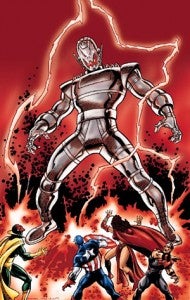 With Brian Michael Bendis and Bryan Hitch set to unleash Ultron on The Avengers soon, it appears as though he may have some company--in the form of a celluloid version of himself. The synergy between Marvel's film and comic book division has always been pretty strong, with stories in Spider-Man and Captain America often being tweaked to accommodate their movies in theaters and even rumors that Nick Fury's race would be changed in order to make the character more accessible to casual fans brought in by the movies. So it's hard to ignore that with the profile of The Avengers higher than it has ever been as a result of next month's Hollywood adaptation of the series, Ultron is starring in his own major event story. Even harder to ignore is the revelation that earlier this week, as part of their Avengers microsite, the Wyndham family of hotels released a digital comic featuring The Avengers, promoted as a tie-in to the upcoming film. The villain? Ultron. Combine that with our recent speculation that the close-up of one of Loki's soldiers (seen at left) looks an awful lot like recent incarnations of Ultron, it's hard not to speculate that it might in fact be everyone's favorite living automaton. It would also jive with rumors of mind control in the story, as not only does Loki possess that skill but Ultron's first appearance featured some variation on the theme, too. Of course, while all of this sounds well and good, attempts by ComicBook.com to reach out to Marvel Studios and their representatives with have been stonewalled and word through the grapevine is that Ultron is a dead-end. Still, it's nice to think you've got a lead in this mystery...!

Is Ultron in the Avengers Movie?