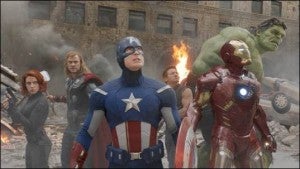 In a conference call with investors earlier today, The Walt Disney Company announced that Joss Whedon--director of The Avengers and creator of Buffy the Vampire Slayer--will return as the writer and director for Avengers 2, as well as developing an as-yet-untitled TV series set in the Marvel Universe and existing on the fringes of The Avengers. The series will reportedly air on the Disney-owned ABC. UPDATE: "Joss Whedon has signed an exclusive deal with Marvel Studios for film and television through the end of June 2015," came a statement from Marvel issued shortly after news broke. "As part of that deal, Whedon will write and direct Marvel's The Avengers 2 as well as help develop a new live action series for Marvel Television at ABC. He will also contribute creatively to the next phase of Marvel's cinematic universe." Chariman and ECO Bob Iger and Senior Executive Vice-President/CFO Jay Rasulo were on the call, and it was Iger who confirmed that Marvel Studios had locked up a deal with Whedon for Avengers 2. He added that the rumored ABC series being developed and set in the Marvel Universe (we've speculated that it may follow S.H.I.E.L.D.) will have involvements from Whedon as well; prior to The Avengers, Whedon was best known for his small-screen work like Buffy the Vampire Slayer, Angel and Firefly.