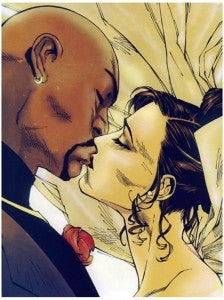 According to MTV's Splash Page, writer Melissa Rosenberg, currently working on AKA Jessica Jones for Disney-owned ABC, has confirmed that there's a part in her script for Luke Cage. The Hero-For-Hire is married to Jessica Jones in Marvel's current comics continuity, the culmination of a character arc that began way back when Brian Michael Bendis was writing Alias (the comic AKA Jessica Jones is based on) and continued through his numerous Avengers projects. Rosenberg describes the show as revolving around "a former superhero with PTSD" and who stars in the show as a private detective. "I love this character," Rosenberg told I Am Rogue in an interview that revealed they're hoping to get AKA Jessica Jones on ABC's schedule in the fall. "That is an incredibly damaged, dark, complex female character that kicks ass. That's my favorite thing about it." The writer seemingly confirmed that Cage will be the love interest for Jones in the show, suggesting that "way down the road," their child may be an addition to the cast, assuming the show lasts that long. There's a bit of a campaign underway on the Internet to give Luke Cage his own feature film, including pleas by leading men such as Isaiah Mustafa and Tyrese Gibson eager to portray the character onscreen. Whether this development makes such a thing less likely--or whether it's just a perfect opportunity to test-drive the character, given that ABC is owned by Disney, the studio in charge of The Avengers films and the owners of Marvel Studios and Marvel Comics, is impossible to say.