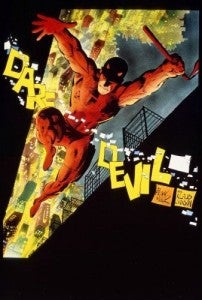 Neither Fox's Daredevil, nor their Fantastic Four movies are exactly fan and critical favorites, and that's part of why they waited so long to act on making a sequel. In the meantime, though, Walt Disney Studios bought Marvel, and essentially ensured that unless Fox and Sony continue making their X-Men, Spider-Man and other movies on a ticking clock, once the rights will revert to Marvel, nobody will ever be able to buy them again. And now that the deadline is close on Daredevil--a property Fox seems determined to take another swipe at--with not enough progress made to comfortably beat the clock, the studio appears to be in a bargaining mood. Variety reports that in order to secure an extension on the Daredevil rights, Fox may be willing to surrender their claims to Fantastic Four supporting characters like Silver Surfer and Galactus, both of whom Marvel is interested in using for future, non-FF projects. Fox reportedly must start filming Daredevil by October 10 in order to retain the rights to the character, which revert to Marvel (as the original owner) if it isn't used regularly. This is a pretty common situation; Warren Beatty reportedly keeps Dick Tracy projects in the development pipeline in order to retain those rights, which he still holds from the 1990 film. One might think that, with such a high-profile failure in the not-too-distant past, Fox would be willing to part with the franchise--but according to Variety, they've got what they think is a promising take on the character in the works. "Fox is in discussions with Joe Carnahan to direct what's been described as a 'Frank Miller-esque, hardcore 70s thriller' take on blind Hell's Kitchen superhero Matt Murdock -- a vision that would deviate from Disney/Marvel's family-friendly tone," reports the magazine. "Carnahan has yet to receive an official offer, though multiple sources tell Variety that he's the choice." That perspective might attract fans, but it might be a harder sell, not only because of the failed Affleck Daredevil still fresh in the memory of moviegoers but also because the "dark, brooding, Miller-inspired" take on superheroes is no long exactly unique--that's the direction fans just finished seeing of Batman, and similar to the way Superman is being developed.