The New Mutants are back in the fold, and Marvel is celebrating in style.

Marvel just announced a set of New Mutant variant covers that will encompass several books, including All-New Wolverine, Cable, X-Men Blue, and more. Each member of the team gets their own time in the spotlight, including good ole Warlock, who graces the cover of The Despicable Deadpool.

The covers are pretty impressive, so you'll want to track down all 10, and you can find which books will cary the covers below, as well as a preview of the covers themselves in the gallery. 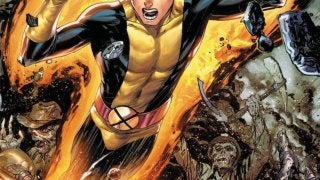 The New Mutants are coming back thanks to writer Matthew Rosenberg (Phoenix Resurrection, Secret Warriors) and Adam Gorham (Rocket), and the series will feature the team of Magik, Boom Boom, Rictor, Strong Guy, and Wolfsbane, a team that is assembled by the former New Mutant Karma. Like the covers, each issue in the series will feature a standalone story, focusing on one member of the team.

"To me, the New Mutants exemplify everything I love about [super hero teams]," Rosenberg said in a statement. "They are true underdogs, doubted and dismissed, but always ready to prove themselves. They're the weirdos, the outcasts, the leftovers, and the misfits, but they are there for the people who need them."