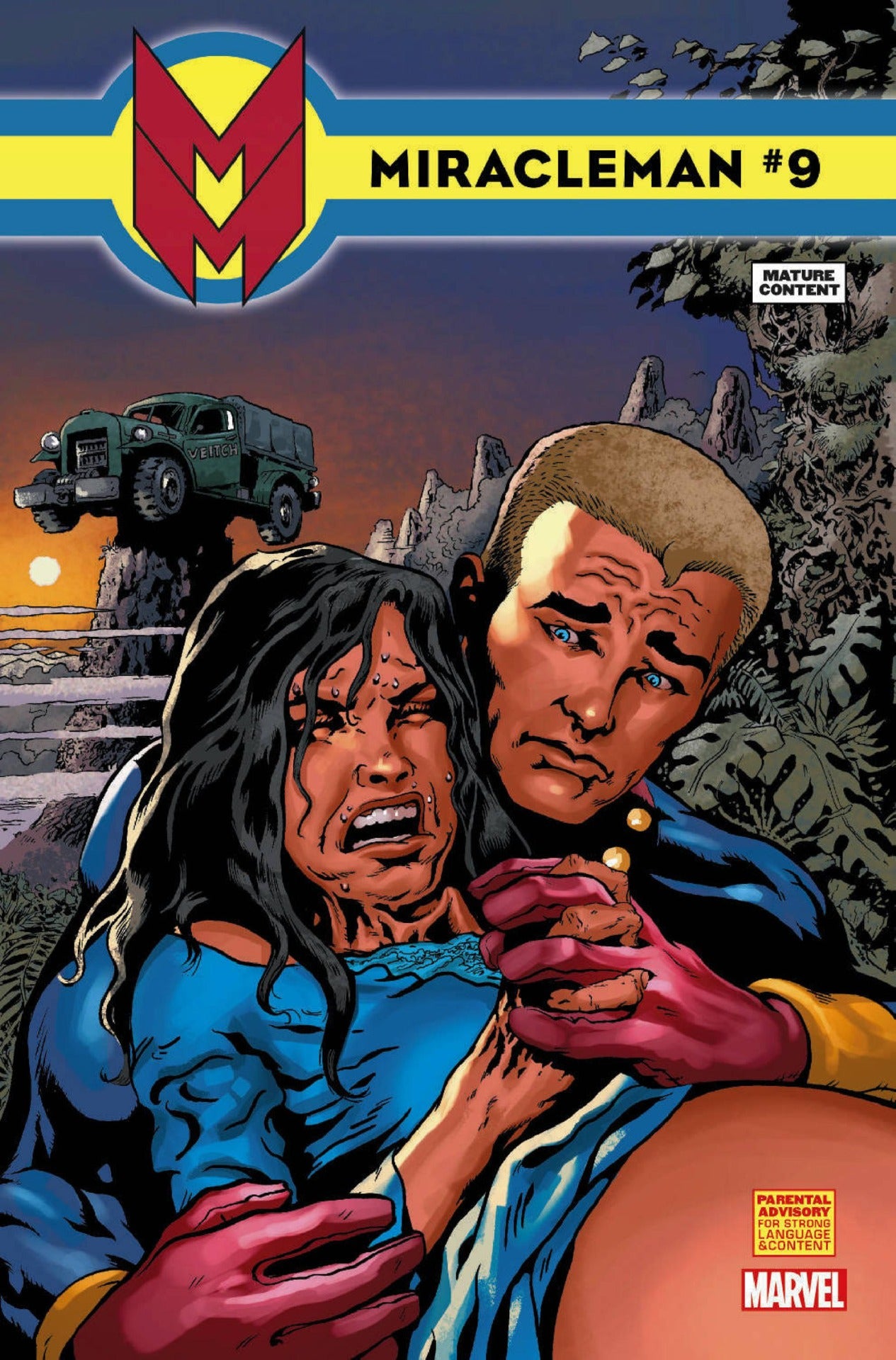 We've finally come to one of the more controversial issues of Alan Moore's Miracleman. Herein is depicted by new-to-the-series artist Rick Veitch with inks by Rick Bryant a graphic and uncompromising representation of the process of Liz Moran giving birth to Miracleman/Mike Moran's daughter. It's certainly surprising or I imagine it was almost 30 years ago when this comic was new. I suppose the question is how well this content holds up and whether it all works to produce an effective whole.

While I'm pleased to see that we've moved on from previous series artist Chuck Austen, Rick Veitch's leaves me with mixed emotions. While Austen was staid, stiff, and a bit uninteresting compared to earlier artists Garry Leach and Alan Davis, he was still polished within his own style. Veitch feels a bit more "sketchy" for lack of a better term. There are times when the faces he is drawing feel ill-defined or slightly misshapen. For an example of the former, see Liz Moran on pages 11 or 13. For an example of the latter, see Micky Moran on page 12 whose lower face might be in the process of melting off and to the right. Still, while Austen felt secure in his style, one gets the feeling that Veitch might just be getting warmed up. 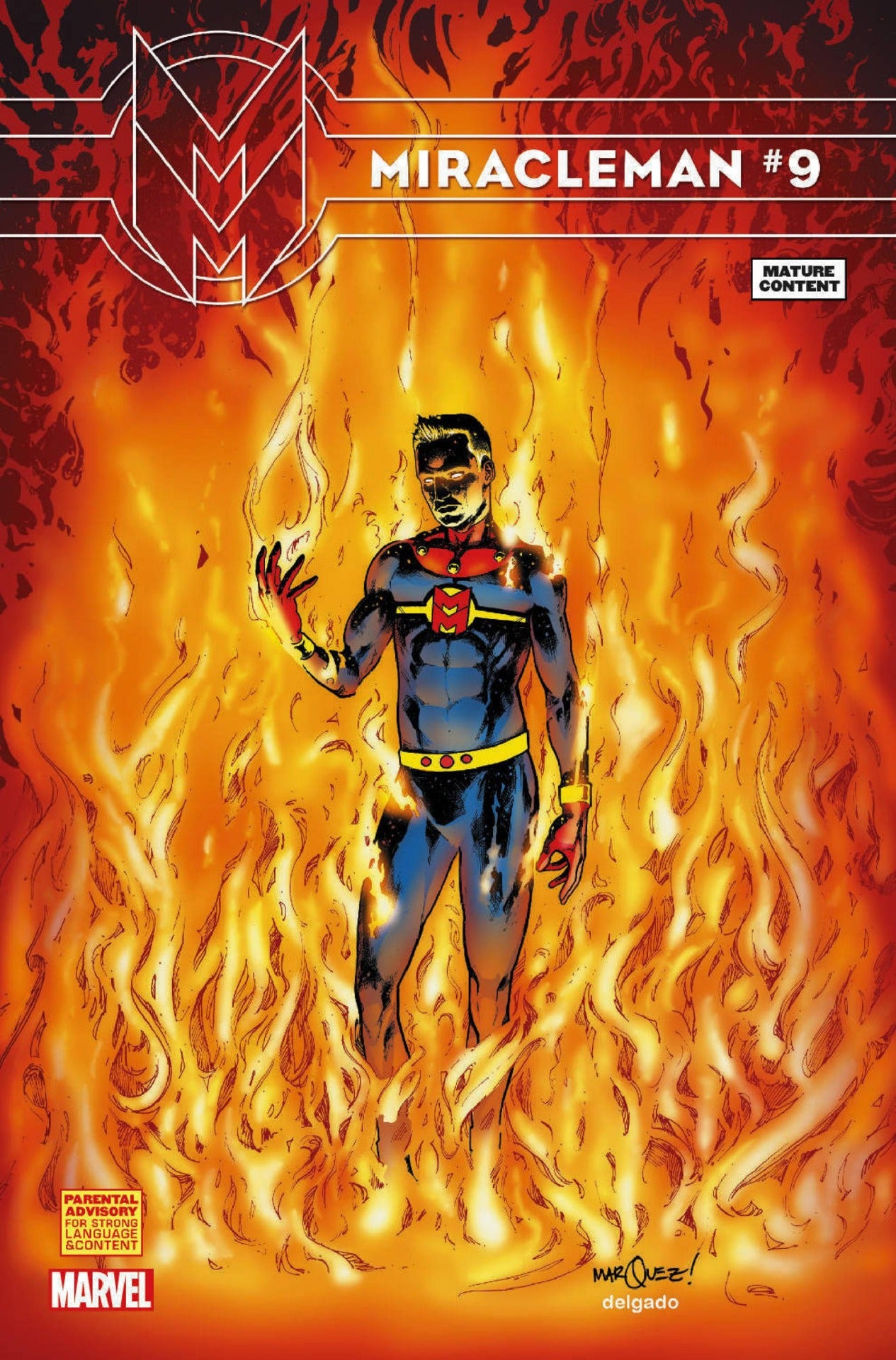 In fact, while not specifically credited inside the comic, Veitch's name on a military transport truck's driver-side door suggests that he drew the cover for this issue. The quality of the work here is miles ahead of the work inside the comic and makes me look forward to viewing Veitch's development if continued working on Miracleman for any length of time (remember that I'm taking this series as it comes in the reprints).

The cover itself works very well as a representation of the comic's content and appropriately draws the reader in. Artistically, it's very well-rendered with great detail and expressiveness to both Miracleman and Liz. It's also worth noting that the presence of the aforementioned truck perched on a rocky peak is a very nice touch. Also, I really do appreciate that Veitch did the cover for Marvel as it is great to have that kind of artistic cohesiveness between the cover and the content. There are only two minor problems that I have with this image. The first is the relationship of Liz's neck to her head. I realize that it is supposed to look as though she is straining but her neck still somehow looks too far forward and to the right. The second is the minor quibble that my particular cover was scuffed along the left side after coming out of an in-tact polybag which suggests a minor defect or lack of care in the printing process.

Getting down to the content, there are essentially three parts to this comic, Liz and Miracleman meeting and traveling to the birth site, a scene with Johnny Bates, and the birth itself. The first section is fairly straightforward as Liz wanders around Gargunza's ruined complex, meets with Miracleman, and he loads her into a truck so that he can safely fly her away to give birth in peace. There are a few notable artistic choices here. The first comes on page one where a page-long panel showing Mike confronted by Miracledog bisects Liz's face transitioning from drowsy to horrified. It's a lovely way of showing the memory slicing through her and affecting her deeply. The second comes on page four where Miracleman is revealed in a cruciform pattern of light with title of this issue "Scenes from the Nativity" in the lower right. Frankly, in my opinion this is a much too heavy-handed combination of Christian symbolism and terminology coming together on one page. It almost works but it has all the subtlety of a punch to the bridge of the nose. The last moment I want to mention is the scene of Miracleman carrying Liz and the truck through a flamboyance of flamingoes. It's a cute and loving moment and possibly because of the generation I was born into, I imagine A Whole New World playing… That and Liz and Mike's matter-of-fact exchange closing out this section makes this a great little humanizing moment that endears the two to the reader. 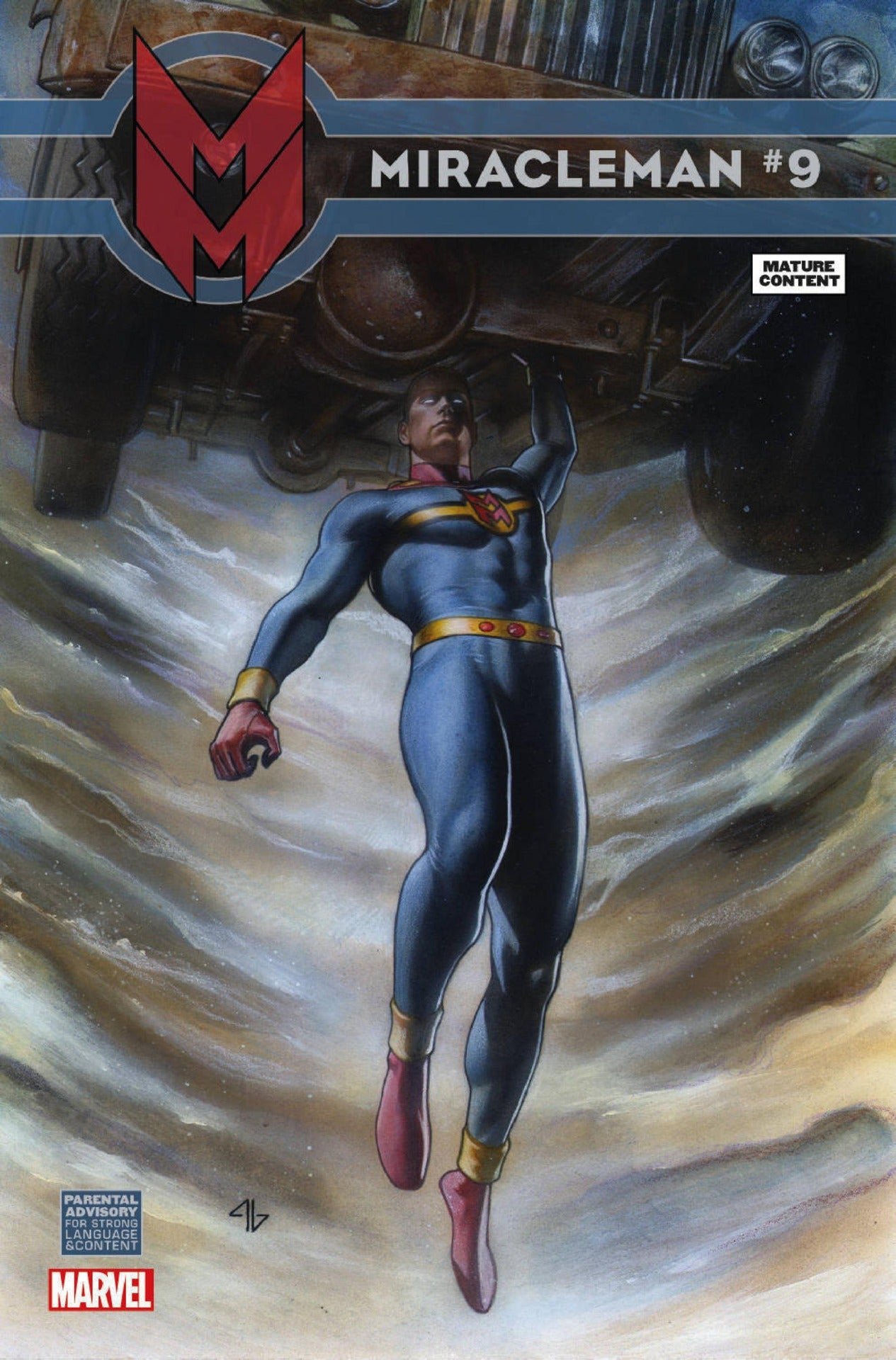 The section with Johnny Bates is only two pages long and less notable for what it is and more notable for what it promises for the future. Two apparent psychics of unknown origin, seemingly brother and sister, visit Johnny, look into his mind, think that his Kid Miracleman persona is gone, and leave just for Kid Miracleman to then appear and wonder at their existence. Reading this, I'm getting more and more anxious about what will almost certainly be Kid Miracleman's eventual reemergence and I'm obviously intrigued by the presence of psychics in this universe. Only two pages of content and they've Moore and Veitch have got me incredibly keyed up for the future. Bravo, gents! I should also note that I quite like the art here and the panel layout on the second page is quite effective.

Now to deal with the birth itself. Essentially, this section is a series of images showing the birth playing out against scenes from Miracleman's past/creation while Miracleman muses in the narrative captions. Honestly, I think this all works really well. I have to hand it to Moore in particular, he really writes Miracleman beautifully here, capturing his love, awe, and deep introspection in an effective and moving manner. Oddly enough I'm reminded of Dr. Manhattan's conversation with Laurie Juspeczyk just before returning to Earth from Mars in Watchmen more than anything else as there appear to be a few thematic parallels. Both Manhattan and Miracleman's musings deal with the idea of disparate and contradictory circumstances and events coming together and coalescing into a beautiful, unique, and specific form, distilling a singular person from apparent and often ugly chaos. As for the artwork, there is both good and bad here with some of Veitch's panels working beautifully and other containing odd facial expressions or questionable composition.

As for the depiction of the birth itself, I don't mind the fact that it is shown as uncompromisingly as Moore and Veitch decided to depict. I don't know that it enhances the effectiveness of this section but it doesn't detract from it either. The nudity certainly doesn't bother me and it doesn't feel as though it was done for shock value. Rather than feeling odd or out of place, one just gets the impression that they are simply watching a natural process. The nudity in The League of Extraordinary Gentlemen bothers me at times because it feels like nudity for nudity's sake and can come out of nowhere. Here though, that is definitely not the case. That being said, I'm not surprised that this comic had "Mature Content" warnings stamped on its cover and came polybagged.

The last thing that I would like to say of the content here is that I really enjoyed the way this section ended. Operating on the principle that one cannot "spoil" a 30-year-old comic, I'm just going to say that I was not expecting the newborn girl to say "Ma-ma" just before the close of this issue. That and the beautiful art on Liz and Miracleman's shocked faces was a perfect way to close and I'm really excited to read more.

It is worth noting that compared to past issues of Marvel's reprinting of Miracleman, this one feels a bit short on actual comic content, only providing 16 pages of actual comic and 26 pages of back matter. I suppose the thought might have been that this birth was momentous enough to warrant standalone presentation and it does. I honestly don't feel cheated though I would feel better about the situation if the back matter was a bit more engaging. The only thing that truly interests me here is the original artwork in various stages of original cover to Miracleman #9 by John Totleben. Having just finished reading all of Moore's Swamp Thing, I of course recognize Totleben's work and it's nice to be able to get a look at the original cover art.

The rest of the back matter though is a bit uninspired. I've seen enough original pencils and inks for this series to hold me over for a lifetime at this point. Okay, we have a new artist so I'll cut Marvel some slack for this issue but I really have had my fill now. Also, these Marvelman reprints while enjoyable have absolutely zero connection thematic or otherwise to the actual story of this issue. I would appreciate something new from Marvel in the back matter at this point. I've said it before and I'll say it again until it happens, please give me a text piece putting this work into context. Give me background on its reception when it was released or its importance to the medium. Really, I'd take anything more than the original art and Marvelman reprints at this point.

Anyway, this is still a worthwhile series and I completely recommend it. Marvel could put a little more effort into the back matter at this point but it's still an excellent reprinting of a landmark comic series by a supremely talented writer and largely wonderful artists. Reading this for the first time has been a joy and I'm definitely looking forward to what comes next.

Marvel’s Miracleman #9: The Miracle of Birth