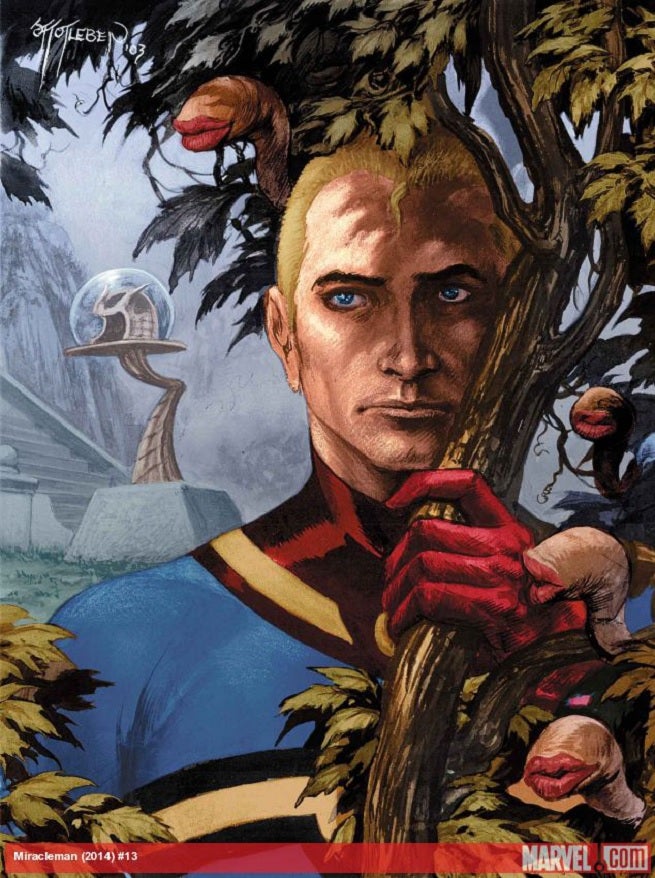 Miracleman series.  Bringing a fresh eye to this landmark series, how does it hold up after more than a quarter of a century?

This is simultaneously quite an intriguing and a somewhat head-scratching issue of Miracleman. While a decent amount of fairly cosmic and monumental things happen, but it is all fairly undramatic. The more I read of the third book of the Miracleman series, titled "Olympus," the more I wonder if the choice to provide a framing device of Miracleman narrating from five years in the future looking back on the events of his life is a mistake.

There's something about seeing Miracleman, the main character of the story, settled in a future where massive events have obviously occurred but the world has settled into some sort of utopia (or possible a dystopia in disguise) that blunts the immediacy of the events depicted. I, as a reader, have a sense that what I'm reading hardly matters since the outcome is already known to both I and Miracleman. Perhaps this is an irrational feeling given that at the outset the ending of every story is in a sense predetermined, but having the status quo at the end of the events repeatedly broadcast detracts from the drama of the narrative. 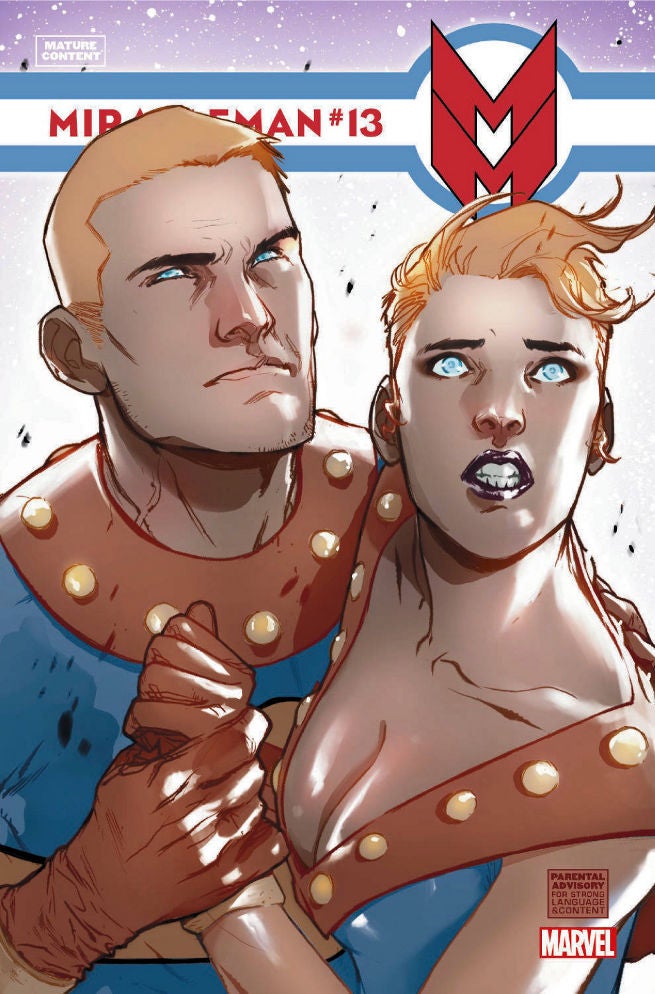 Alan Moore's narrative captions certainly aren't helping to push along the story. While they are less pretentious than in the last issue, they are still tending toward the verbose and overly intellectual. Still, Moore mercifully throws in the occasional offhand line or colloquialism like, "I'm giving them 'til lunch." Such lines are a breath of fresh air and while still in the minority, it's quite nice to see them here. Even just a mercifully short sentence like, "Mankind knows better," is quite welcome after the last issue's narrative excess.

I said earlier that this was still an intriguing issue of Miracleman and that is certainly the case. It's actual content finds Miracleman and Miraclewoman traveling to the world of the Qys, the creators of the "multiple-body technology," where they also meet the Warpsmiths, with whom the Qys are engaged in a kind of intergalactic Cold War. With the existence of Miracleman and Miraclewoman as well as the birth of Miracleman's daughter Winter, there is concern over where Earth now fits into their status quo. This issue is provisionally settled and the Miracle-persons returned home. Once back on Earth, Liz Moran leaves Miracleman (as she says, temporarily) as she is uncomfortable around their daughter and feels as if she might be exerting some control over her mind. The issue closes on the newborn Winter speaking for the first time and saying, "Father? I think it's time we discussed Mother. Don't you?"

From that last paragraph, I hope that you can gather the idea that while things happen in this issue, not a lot of it is dramatically engaging. The single most exciting moment is when Winter speaks, a not entirely unexpected moment but still quite effective. Honestly, this moment is the one that I find promises the most going forward. I could mention the short look at Johnny "Kid Miracleman" Bates which I'm almost certain is foreshadowing Kid Miracacleman's reemergence as an exciting moment. The issue there is that we've gotten brief glimpses at Bates so many times now that it feels almost redundant to peek in at him again without something substantive occurring. 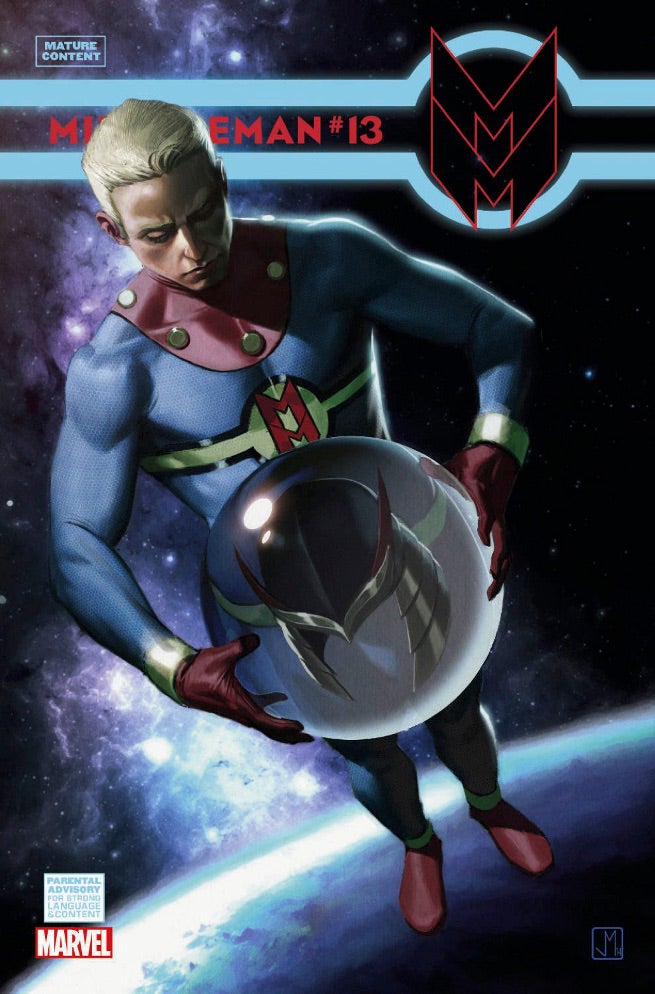 I suppose there is one other positive item worth referencing. This issue opens with Miracleman looking into a sort of engineered closed ecosystem undergoing its own unguided evolution. It's an interesting way to open showing Miracleman in the position of a god relative to this miniature society which seems to have been a theme all throughout this book of the series. This also could be interpreted as a nod to the Superman mythos and the Bottle City of Kandor.

Before turning to the art, there is one more specific moment that I want to call attention to as problematic. It deals with Miraclewoman and takes place on the planet of the Qys. When confronted by the Cold War of the Qys and the Warpsmiths, she suggests that rather than remain deadlocked they, "Have sex." This seems like a choice made simply to shock the reader. It certainly shocks Miracleman and the Warpsmiths until another layer of meaning is applied to her words. As she explains, "It's obvious. If two organisms or cultures are forced into contact, it can be thanatic and destructive, or erotic and creative." Essentially, she was suggesting they have a metaphoric sex of culture. My question is, what intelligent being would ever phrase the idea as she did to begin with unless prompted by a writer who thought he was being clever?

In terms of the art, it is simultaneously a step up and a downgrade from the previous issue. The improvement comes in the panel layouts. While last issue had mainly jumbled panels, this issue has very intriguing structured panels. These layouts range from mirrored page-to-page, angled to show progression, and making excellent use of negative space to convey a compressed passage of time and otherworldly travel. Unfortunately, the art itself at times suffers from being rather ill-defined. For instance, Miraclewoman's face in the central panel of page 11 looks rather shapeless, the doctor and Johnny Bates' faces on page nine are similarly questionable, and the art on pages four and five is fairly lacking in detail in general. Admittedly, with that last example everything is depicted from a distance but even so it looks as though less care was taken in depicting the figures and setting. That being said, there are still some excellently done pages of Miracleman in his garden and outer space.

Considered as a whole, Totleben's art is still among the best that the Miracleman series has seen. It is most certainly superior to that of Chuck Austen and Rick Veitch, even surpassing the early work of Alan Davis.

At this point, the back matter is hardly worth mentioning. The standard mix of pencils and inks of Totleben's art from this issue are provided as well as a brief reprint from a classic Marvelman issue. The standout items are the original Totleben cover to Miracleman issue 13 from 1987 and a Totleben house ad for the series. Regarding the reprint, let me just say that if you're going to show me a cover depicting Marvelman fighting Christopher Columbus, then I'm only going to be disappointed if that part of the comic isn't what you're reprinting for me to read. Needless to say, Columbus did not appear in this reprint. Instead, we get another part of the multipart story that has been reprinted over the last few issues of this series.

In the final analysis, I feel comfortable saying that this issue is something of a mixed bag. The series continues to be an engaging and thought-provoking read but this particular installment felt a bit transitional and slightly less satisfying on its own. Personally, I'm writing this off as a necessary evil in a series like this. Regardless, that ending cliffhanger with Miracleman's daughter Winter was still quite excellent and I am very much looking forward to reading more of this series.

Miracleman #13 Review: Now Is the Winter of Our Discontent