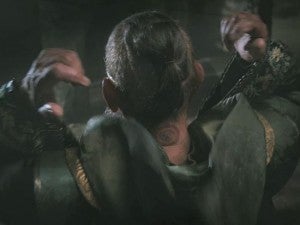 In a write-up of the "weirdest things" seen in the Iron Man 3 trailer released yesterday, Entertainment Weekly's Anthony Breznican raised an interesting point: Why would The Mandarin have a Captain Americatattoo? And if it's an impostor, what kind of impostor would impersonate the Mandarin in order to gain access to his compound or files or whatever it is they're hoping to get out of impostoring? It would be an insane proposition, especially if you're not wearing his trademark rings. Sure, there's the possibility that he has an inner circle who all dress like that in order to draw attention away from him. Think Saddam Hussein's rumored body doubles. So maybe there's that. Still--who would have a Captain America tattoo just below the hairline on his neck? Asks Breznican, "Furthermore, who's a big enough Cap fan to have a tattoo like this? Dare I speculate … dear Captain America trading-card collector Agent Coulson? Nah. Couldn't be. Or … Nah." It's probably unlikely--okay, incredibly unlikely--that this half-joking theory posited by EW holds any water, but it's an interesting theory nonetheless. For many fans, Coulson has been an integral part not just of the Marvel Cinematic Universe in general but of the Iron Man films in particular. And you know what they say about trilogies. Wait, you don't know? Well, let's allow Shane Black, director of Iron Man 3, to explain it to you, thanks to ComicBook.com's San Diego Comic-Con International coverage: "I think the way to go about doing a [third movie], if you're ever in that position as I'm lucky enough to be," Black said in a press conference in July, "you've got to find a way that the first two aren't done yet." He said that the ideal goal is that by the time viewers finish watching the third movie, it should feel like part of a trilogy organically. Well, Coulson would fit that bill...!