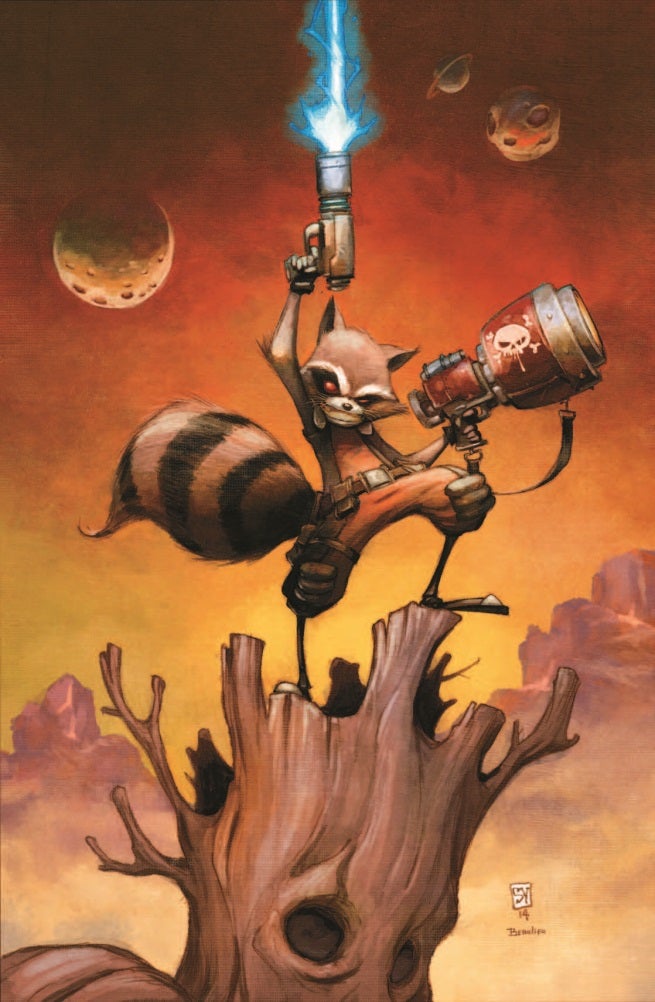 This week sees the launch of Rocket Raccoon and The Legendary Star-Lord, two new titles that Marvel presumably hopes will have a symbiotic relationship with their upcoming, James Gunn-directed feature film Guardians of the Galaxy.

Marvel gave ComicBook.com an early look at Rocket Raccoon, by writer/artist Skottie Young, this weekend, giving us a chance to really let the impression settle in a little bit before they gave us the opportunity to be the first to review the title this morning.

The launch of Rocket Raccoon is an odd one; it reads a bit like a middle chapter in spite of being a first issue. 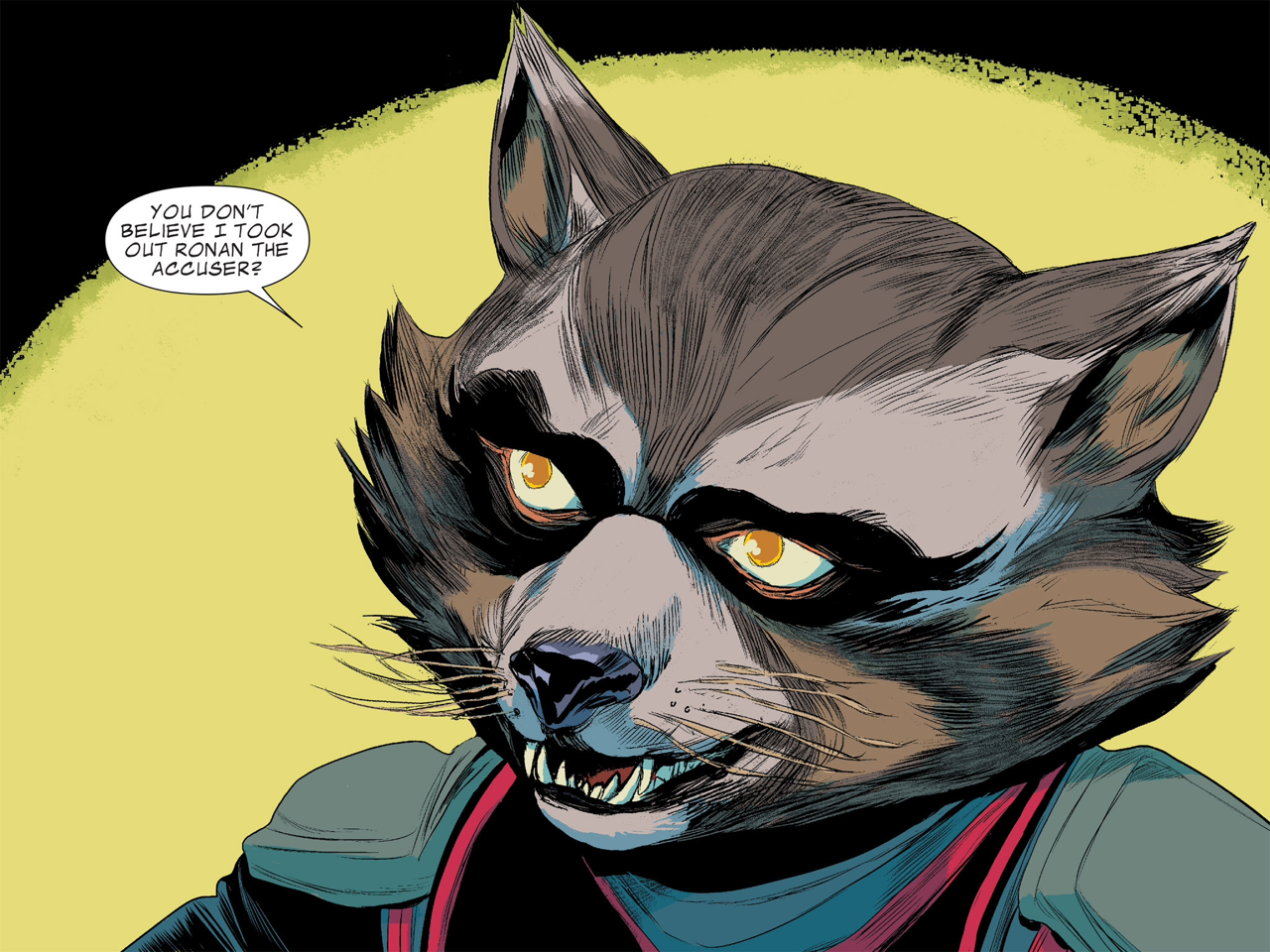 That's because the Guardians of the Galaxy Infinite Comics: Rocket Raccoon story by Brian Michael Bendis and Yves Bigerel is absolutely a part of the story as presented here. You'll want to read it before you jump into Rocket Raccoon #1 for context, which you can do for just $0.99 at ComiXology. There's a collected edition of all of the Guardians of the Galaxy Infinite Comics, titled Tomorrow's Avengers, that you can get for $3.99 here, which is a bargain both because the comics are pretty great and because it averages out to less than the buck-a-pop to get the singles. For the purposes of Young's Rocket Raccoon, though, there's really no need to read anything except the Rocket Raccoon chapter.

Also, if you buy a physical copy of Rocket Raccoon #1, you get the $3.99 comic for free when you redeem your code at Marvel.com or ComiXology, which makes the whole thing doubly a bargain.

you can get everything you need from the issue itself, but the Infinite Comic will enrich the experience significantly and it's difficult to say that those who haven't read it won't be at least a little lost when they start to flash back to that issue's events (an editorial acknowledgement might not have hurt anything here).You've probably seen Bradley Cooper deliver the line "ain't no thing like me, 'cept me" in the second Guardians of the Galaxy trailer (embedded below), and that's a key refrain here, as it was in the Infinite Comic. The payoff to that is fairly obvious, and to Young's credit, he doesn't make any serious effort to sidestep it.

Rocket is baffled and a little let down to discover there's a chance that there isn't any truth to his best pick-up line, and it's that revelation -- along with the fact that, like in the Free Comic Book Day issue, he's on the run from the law -- that drives the plot of the issue. 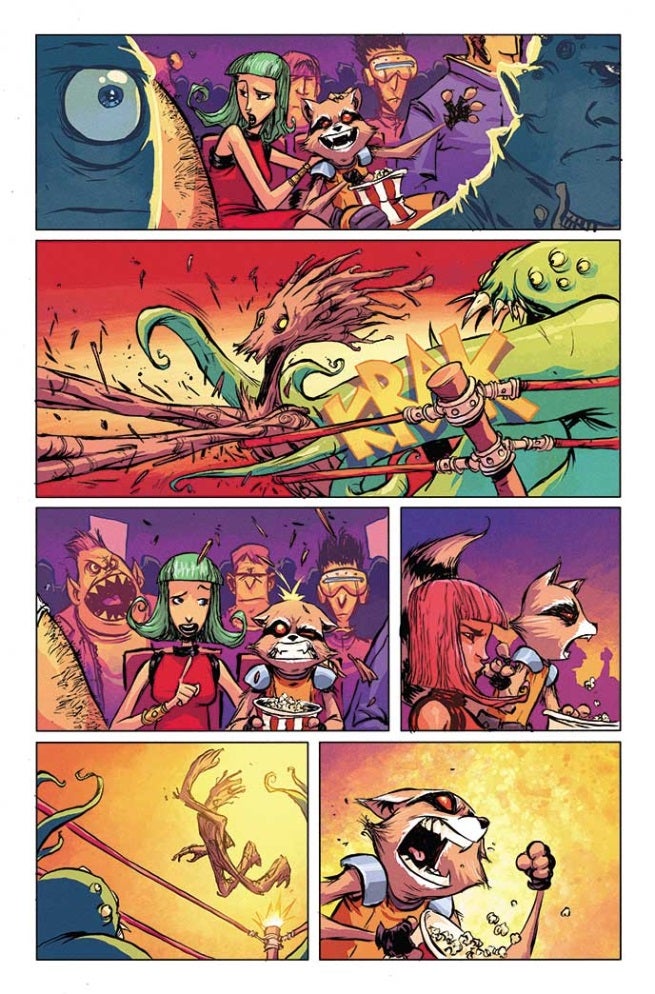 His character himself is not all that sympathetic for much of the issue, and it seems that will be key, at least to the first arc. Besides some instances of bad behavior, he's talking a blue streak. The issue doesn't have, or need, internal narration boxes or thought balloons because everything that pops into Rocket's head, pops out of his mouth a few seconds later. Fans of Todd Dezago and Craig Rousseau's The Perhapanauts would do well to check this series out, as the crazed ball of energy that is Rocket will be a fine comfort food to anyone missing Choopie the Chupacabra.

The figure pulling the strings in the first issue is an unexpected but natural twist at the end of the issue; it's pulled off well, but it -- like much of the rest of the issue -- feels like it owes a huge debt to Keith Giffen and his (co-)creation, Lobo.

That sounds a bit outrageous when you consider that Rocket looks like an all-ages book...but it really is not. This may be Skottie Young's conscious attempt to step out of the "hey, isn't that adorable?" box, in the same way Dan Slott did when he took on Arkham Asylum: Living Hell after years spent doing licensed kids' comics.

Even if that's not a conscious decision, it may be the practical upshot of working on this very-not-for-kids book. It's rated 12+ and that's about right; the issue starts with Rocket rescuing a princess (a recurring theme from the Free Comic Book Day issue, and one that's acknowledged in dialogue here, so it seems likely to be an important recurring theme in the title) by obliterating a couple of hapless security guards with an explosive device. You get to see bits of them, and some skulls, in the next panel but it isn't gory or particularly excessive. It would be a hard PG-13 as a movie, and it sets the tone for the rest of the book.

Back to the comparisons to Lobo, though: the two characters share a common ancestry, so to speak: Keith Giffen, the artist who co-created and first drew Rocket, did the same for Lobo. Years later, Giffen would rewrite Lobo's origin to the one most fans would recognize -- that he became the last Czarnian after killing off his entire race -- and the types of madcap stories that leapt from that version of the character are evoked here.

The art is reminiscent of something you might see from Giffen -- more sketchy and kinetic than the very posteresque covers Young typically creates. That likely contributed to the feeling that this book has a lineage in Giffen's prior work, but even without it, there's a plot development at the end that is the kind of bizarre, frathouse humor that would have been perfectly at home with Lobo, a character who -- just as a for-instance -- at one point had to battle an army of his on illegitimate children. It's also great for the book; it's easy to love Young's covers, but it's difficult to imagine that committing fully to that style would work for this book. 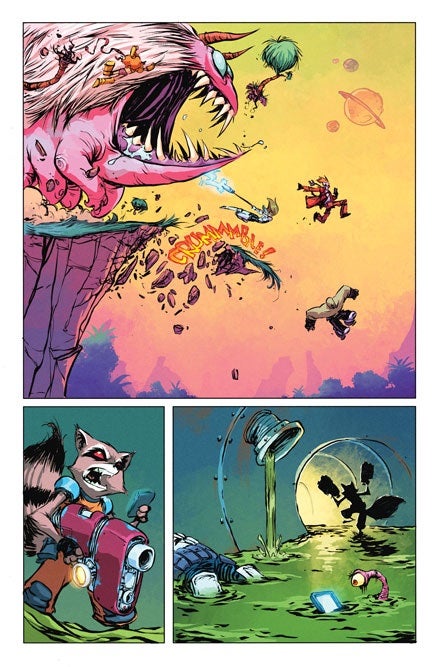 The place where Young's style is most recognizably Young-ian, in fact, is during a brief cutaway to the Guardians of the Galaxy, where the threat they face is something few other artists could pull off quite the way Young did.

Observant fans will find a ton to love in the jam-packed pages of this book; other than maybe Transmetropolitan, I can't recall ever reading a book so utterly inundated with pop culture and other references, in-jokes and Easter eggs that didn't feel totally out of place. Young manages to build them organically into the  background of the art in a way that's clear but not distracting -- and while I recognized a good half a dozen myself, expect a whole Reddit thread to pop up on Wednesday as fans start to identify everything they see in this issue, from movies and video games to a wink-and-a-nod reference to a best-selling Image Comics series.

You can even see a cool Easter egg on the already-officially-released preview page at right.  And no, not just Star-Lord's movie-homage jumping pose...

The bottom line: Rocket Raccoon starts off like a shot, and it ends up in a clever and surprising place. In between, it seems like it meanders a bit, but that can be forgiven when you take into account that this is hardly a first issue, despite that All-New #1 on the cover. The art is beautiful and perfectly tuned to the series, and Young has drawn inspiration from a number of sources, not least of which appears to be source material from Rocket's creator. The downside? Relying heavily on the Infinite Comics and evoking a particular other work so strongly make it feel like this issue doesn't stand on its own all that well...and when you've got 300,000 people reading it, that's going to be an awful lot of first impressions and quite possibly a lot of fairly confused new readers. 8/10