Marvel Comics came to New York Comic-Con to showcase their upcoming Spider-Man titles and story arc, "The Clone Conspiracy." Moderator Nick Lowe talked about Dan Slott bringing him the idea for this crazy dark Spider-Man story... and it's here. Througout the panel, he let dedicated fans with great cosplay read new issues about the character they were dressed as. Fans love it.

We saw the first issue of Dead No More: The Clone Consiracy by slott with art by Jim Chung. SPOILER: Gwen Stacy returns, as we get to go back in time and see, what Slott describes as "Something you've never seen before, which is canon. You'll find out Wednesday." He warns fans to read the book before they open Amazing Spider-Man #20, as Dead No More will be spoiled if you don't read in sequence.

Next we saw covers and art for Clone Conspiracy Pt. 2 and Pt. 3. Doc Ock was revealed to appear in ASM #20, with Carrion appearing on the cover of #22. Issue #23 had a Gwen and Spider-Man about-to-kiss cover, by Alex Ross.

Robbie Thompson talked about Silk's next arc, which will see her taking on a new threat and a new costume/alter-ego "Silk Worm" to help conceal her identity. It's a thing disguise, and Thompson joked "she really thought this through." Spider-Man will return from the dead (thanks to the Clone Consipracy) and she and Silk will square off.

Thompson went on to reveal a little bit of Prowler, revealing that he will have his own "Clone Conspiracy" tie-in arc.

Ramon Perez talked about Richard Rider's return from the dead as Nova. He talked about the new story arc, which will see older Nova trying to school younger Nova (Sam Alexander) on how to be a hero. Thompson talked about bringing together the creative team for the book, which they wanted in order to make "Rich Rider's" return feel worthwhile.

Dennis Hopeless talked about Spider-Woman #13, which will pit Spider-Woman against Hobgoblin - something Hopeless has wanted to see. He moved on to Venom #1, talking about how they've been building up thier symbiote characters, refrerencing the Symbiote strike force. He name-drops Eddie Brock, saying he's a "pretty serious part" of the book, without revealing what role he will play. We know the Venom design will be "old-school, long-tongue Venom."

Next we saw Joe Kelly and Ed McGuinnes's work on Spider-Man/Deadpool #9 and #10, which will introduce a new female villain that Lowie claims is one of their most frigtening yet. He also revealed celebrity writers coming on board; Penn of Penn & Teller will write issue #11, in which Deadpool switches places with Teller. Paul Scheer of The League and HDTGM podcast will write a Christmas story for issue #12.

Next we saw Gerry Conway's new Spider-Man book, Renew Your Vows, which Lowie said is for the fans who still wnat Spider-Man and MJ to be together. Annie an MJ will both get new costumes - but how MJ got superpowers will be part of the mystery. The book goes on sale on November #9. 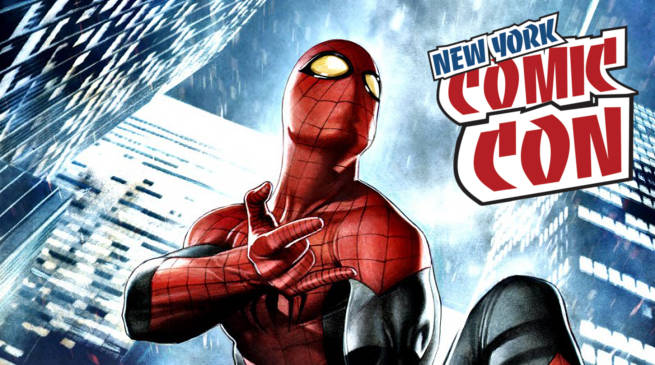 A fan asked how the creators handle the power of killing or resurrecting characters. Slott joked, "I usually flip a coin," before sharing an anecdote where he once tried to kill of a character created by Steve Ditko, and had to lie his way into a robot body ressurection to avoid getting in trouble. Dennis Hopeless added that death is a powerful device in storytelling, and you have to balance the impact of a death against to the impact of a ressurection.

Slott talked about seemingly killing off Hobgoblin and the fan backlash, while the character's creator, Roger Stern, understood that death doesn't have to stick in comics. Perez teased death and ressurection being a major theme they explore in the new Nova book.

One fan asked if "Clone Conspiracy" would bring back Uncle Ben; Lowe and Slott tried to downplay it, saying with exaggerated coyness "We could never bring Uncle Ben back!" "That would be CRAZY!" "Fans would kill us!" As the fan laid out his theory (that Jackal already know Spider-Man's identity) it sounded more and more possible that Uncle Ben's return could be a major twist and/or bit of fallout from the story. A fan later said "Don't bring back Uncle Ben. Please." to which Slott responded, "That's a very declaritive statement." Early prediction: it wouldn't be a development that fans wholly embrace. At all.

Spidercide and Kaine from the '90s Clone Saga were also hinted at being character we may see in "Clone Conspiracy."