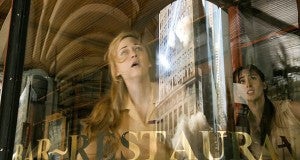 If you thought, as Stan Lee apparently did, that the Marvel Comics icon's cameo in Marvel's The Avengers was a bit of an afterthought, we have good news for you. In a new deleted scene that's hit the Web from the forthcoming Avengers DVD and Blu-ray, Captain America's relationship with the waitress he saved during the Chitauri invasion (played by The Help's Ashley Johnson, who also appears in Much Ado About Nothing from Avengers director Joss Whedon). As she leaves and he, in his civvies and still reeling from discovering that he's a man out of time, watches her go, Stan Lee (part of a table of older men apparently playing some game together) leans over to mutter courting advice to Cap. It's a marginally more substantial but immensely more recognizable cameo, and lends some context to Ashley Johnson's later role, so it's a shame to see this sequence go...but it was overlong and basically all slow, quiet character stuff, so it would have worked better to have at the end of Captain America: The First Avenger rather than the beginning of The Avengers, so it makes sense that it was left out. In any case, check it out below, because on its own it's a nice little sequence that, among other things, proves Whedon gave some thought to Peggy Carter...and that she's still alive as of the last time S.H.I.E.L.D. updated their files on Captain America's friends and allies from the war. Will we see her--or, more likely, her daughter--in Captain America: The Winter Soldier? Only time will tell, but my gut says yes.