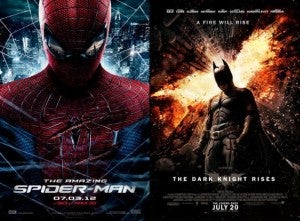 Our friends over at Batman-News have spotted a listing at a Canadian film ratings website that seems to suggest a trailer for The Dark Knight Rises with a runtime of two minutes, thirteen seconds will screen with next week's release of Sony's The Amazing Spider-Man. Given the proximity of the two releases, the shared audience of the films and the fact that Warner Brothers already attached a Batman trailer to the front of The Avengers, the report in and of itself isn't surprising. What is a bit baffling is that there's no trailer presently released with that runtime, leading to speculation that there may be a fifth official Dark Knight Rises trailer coming before the film hits theaters. Of course, the fourth trailer--which surprised everyone when it hit last weekend and has so far been a Nokia exclusive due to the cell phone manufacturer's tie-in promotions with the film--clocked in at 2:17, meaning that any minor changes made to that trailer could easily account for the four seconds' difference.

The Dark Knight Rises: New Trailer Before The Amazing Spider-Man?