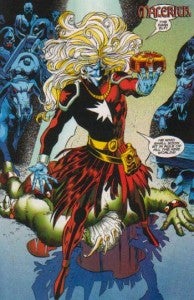 Any fans who still had lingering doubts that the Dark Elves of Svartalfheim would be the villains in the upcoming Thor: The Dark World can put them to rest: Deadline is reporting that Christopher Eccleston has been cast as Malekith the Accursed, the ruler of that race. Eccleston, who is best known for his tenure as Doctor Who, has also appeared in films like G.I. Joe: The Rise of Cobra and on the NBC series Heroes. Malekith, who has often worked with or in ways similar to Loki, is often associated with the political intrigue of Asgard. Perhaps his best-known stories, though, revolve around the Casket of Ancient Winters, a MacGuffin not entirely unlike the Cosmic Cube/Tesseract that drove so much of the action in Marvel's The Avengers. The item, which has appeared not only in the comics but also in the fan-favorite animated series Avengers: Earth's Mightiest Heroes, is capable of hurling Earth into a never-ending winter. Of course, this reporter comes from Syracuse, so in the grand scheme of things Malekith is apparently not capable of delivering anything I'm not already familiar with.