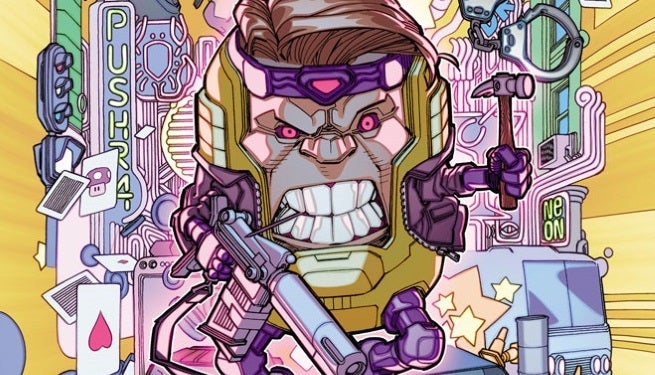 Chris Yost and Amilcar Pinna will take Marvel readers to one of the most dangerous regions of Battleworld in MODOK: Assassin, a Warzones miniseries taking place during this summer's Secret Wars event.

The series takes place in a region of Battleworld called Killville, where MODOK has risen to the top as the most dangerous assassins around. So what's next for the Mental Organism Designed Only for Killing? We asked the writer himself, Chris Yost.

As part of the "Warzones" set of Secret Wars titles, MODOK Assassin is taking place in the region of Battleworld called Killville. Can you tell us a bit about this region? It sounds nice.

YOST:  Killville is a region that places a much lower value on human life than most.  If this were a What If?, it'd probably be called something like "What If MODOK Killed All Every Super-Hero Ever?" and you'd pretty much have Killville.  This is a place where if you have a problem with someone, there's always one singular solution that stands out.  It's not lawless… there's a strict order to things.  Mess with that order and… well, you can probably guess.

The Marvel Universe has plenty of assassins – Elektra, Deadpool, etc. – so why was MODOK chosen as the centerpiece of this Killville adventure?

YOST:  MODOK is a much loved character, and we wanted to see him live up to his potential.  His potential for killing.  That is what he was designed for, after all.  For a guy who was designed only for killing, who has he really killed?  Well, get ready.  MODOK is arrogant, insane, kill-crazy and just a messed up visual.  How could we NOT choose him?!

How is Killville's MODOK different than the MODOK we know from the mainstream Marvel Universe?

The solicitation for issue #1 mentions Killville's "Merc with a Mouth." Can we expect to see MODOK taking on Killville's Deadpool? What, if any, other Killville versions of Marvel's deadliest characters should we be looking out for?

YOST:  Well, the first issue has DOCTOR OCTOPUS, BULLSEYE and BARON MORDO.  By the third issue, if they're a killer in the Marvel Universe, they're probably going to show up.

Marvel has said several time that these Secret Wars tie-ins are not throwaway stories, and that they're planting the seeds for things to come in the "All-New Marvel" era to follow. Does this series signal big things to come for MODOK post-Secret Wars? Can't you hint a bit at the direction the character is heading in?

YOST:  A perfect example of Killville… if for instance I were to speak of such things, I'd be dead before I finished the sentence.  MODOK is a story, a ridiculous story about a giant headed, science loving killer.  Is it important to the hundred year tapestry of Marvel Comics and does it plant seeds that are so important that you just HAVE TO READ IT?  You be the judge.

You're working with Amilcar Pinna on this series, who is fantastic. Do you plan to challenge his tolerance for violence with this series?

YOST:  Oh my god, yes.  Beautiful, but disturbing.  There's everything from gritty murders, one on one battles, and epic, epic war coming for MODOK.  It should be gorgeous.  And if the visceral kill kill kill isn't enough… there's the romance.