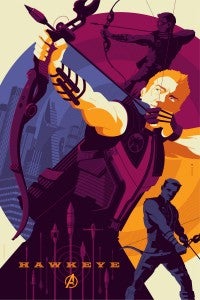 Mondo, the collectible art shop for the famous Alamo Drafthouse Cinema, will release a pair of ultra-low print run, exclusive Avengers character posters, designed for Mondo and their fans, beginning tomorrow. Between now and the film's release, five more such posters will be made available in similar ways, immortalizing other characters from the film. All seven in the series will be available online, although the press release urges fans to follow Mondo on Twitter for more information on sale times. Featuring Hawkeye and Black Widow, the posters are designed by artists on staff at (or working with) Mondo. Available Friday in a print run of only 220, the Hawkeye poster by Tom Whalen is very comic book-inspired, with a pop art feel that resembles the covers to Marvel Comics' just-announced Hawkeye ongoing. The Black Widow poster, meanwhile, was designed by Olly Moss and utilizes a beautifully minimalist style that evokes a poster for a classy European thriller, more than a crash-bang American action blockbuster. Slightly more of these--but still only 320--will be made, and it will go on sale tomorrow. As described in the release: 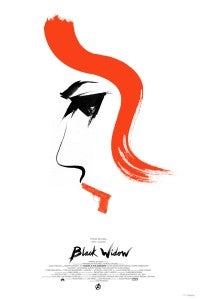 Drafthouse Cinema, proudly announces the release of a series of 7 posters honoring MARVEL'S THE AVENGERS, in theaters May 4.  Mondo will be releasing character posters for each of The Avengers: Black Widow, Hawkeye, Iron Man, Captain America, Hulk, Thor and a poster featuring the full Avengers team. Seven different talented Mondo artists have been tapped to create a poster for each member of the super hero team.  Each artist will have their own take on capes, shields, hammers and masks that will make for an amazing collection when assembled.  The first two posters in this incredible series are Black Widow and Hawkeye. We've become very attached to doing Marvel movie posters over the past few years, specifically for Avengers-related characters, so working on the upcoming film is a huge dream come true. The participating artists have really brought some of their best work ever to the table. If you want to see the different styles the Mondo crew is capable of, look no further than this series, we couldn't be happier with it," said Justin Ishmael, Mondo Creative