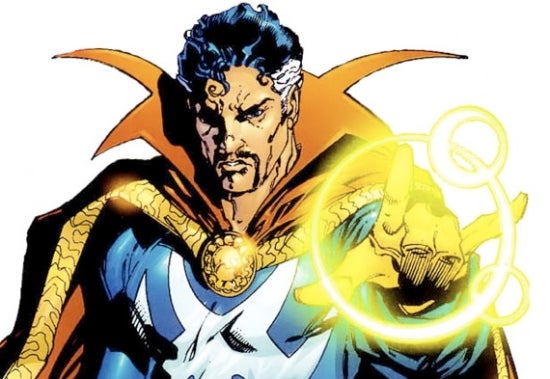 File this firmly under "we all assumed as much, but now it's official." In a new interview with Empire Magazine (via SMN), Marvel Studios honcho Kevin Feige said that the upcoming, as-yet-unscheduled Doctor Strange film is the doorway into the supernatural side of the Marvel Universe. "There's a whole other side to the Marvel universe, which is the supernatural side," Feige told Empire in the issue on sale today. "We've always been very interested in this aspect and this is going back to the early days of Strange Tales with Steve Ditko and Stan Lee. I love that stuff. We haven't done anything that mind-trippy yet and for me, Doctor Strange is our doorway into that." Bridging the gap between The Avengers (the character was already referenced in Captain America: The Winter Soldier) and the side of the universe that has already seen other studios produce movies like Blade and Ghost Rider, Strange is a brilliant and arrogant neurosurgeon who, after his hands are mangled in an accident and he can no longer practice, turns to the supernatural and becomes the world's most gifted sorcerer. The film, which has been confirmed by Feige but never officially announced, is expected to get at least a release date and probably a director and/or star at San Diego Comic Con International in July. Reports have suggested that Jon Hamm has been cast in the part, but shortly after that, rumors came down the pike that the existing script was being scrapped and the movie was starting more or less from scratch.

Doctor Strange To Be the "Doorway" Into Marvel's Supernatural Side