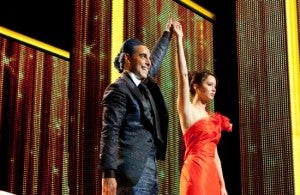 With under a week to go until "The Hunger Games" officially hits theaters, early reviews have started to sit various sites. The film, based on the bestselling novel of the same name by Suzanne Collins, is one of the most anticipated movies of the year. So what are critics saying? So far, reviews have been overwhelmingly positive. We haven't been able to find anyone that hasn't liked it, which is somewhat amazing these days. Here's a quick rundown. The U.K.'s Guardian calls it "is that rarest of beasts: a Hollywood action blockbuster that is smart, taut and knotty." Empire Magazine gave it 4 out of 5 stars, saying "As thrilling and smart as it is terrifying. There have been a number of big-gun literary series brought to screen over the past decade. This slays them all." HitFix calls the film "very special" and has great words for director Gary Ross, as well as Jennifer Lawrence (Katniss).  He describes Katniss as a character "who manages real strength without simply being a female version of a male character.  She is strong, she is capable, she is emotional, and she is human, and the script, adapted by Ross and Billy Ray, allows Katniss all of her rough edges, and Lawrence invests her with a rich inner life that makes her feel real.  It is a pure movie star performance, and Lawrence rises to the occasion." The Daily Mail also praised Lawrence: "She plays the best kick-ass heroine to grace the big screen since Sigourney Weaver's Ripley smacked around that Alien, three decades ago." Slashfilm agreed that Ross directed a heck of a movie: I'm happy to report that director/co-writer Gary Ross has made the impossible possible. With The Hunger Games he has made a rousing, highly-emotional, and epic film that will be engaging for new audiences and give chills to true fans. It's hard to imagine someone making a better adaptation of Suzanne Collins' popular novel. "The Hunger Games" hits theaters next Friday, March 23rd.

Early Reviews of The Hunger Games. What Are Critics Saying?